The Focus Attack (フォーカスアタック), known in Japan as Saving Attack (セービングアタック),[1] is a move introduced in Street Fighter IV, which is available to all fighters that appears in the series. It is executed by holding both medium buttons at the same time and can be charged.

Focus Attacks are accompanied by black ink streaks, which are featured in the official artwork for the Street Fighter IV series. The presence of the ink may also be a reference to how the fighters use and display a "literal" martial art.

During a Focus Attack, the character gains Super Armor (known as Hyper Armor in the manual) against one attack (which will instead inflict provisional damage); as such, it can be used, somewhat sparingly, as a quasi-counter. The Super Armor is active during charging, but not during the actual attack, meaning that one is vulnerable in the brief window between letting go of the buttons and actually delivering the attack. The 2-bar canceled version doesn't gain the armor benefit.

The attack has three levels, and gains additional effects, determined by how long the buttons are held down before being released.

The Focus Attack, like all other attacks, fill the Super Combo Gauge slightly and absorbing a hit while charging one fills the Revenge Gauge as well. A popular tactic is to use a level 3 Focus Attack against a stunned opponent due to it's high damage. Players doing this should be aware that this tactic does take up 2 points in the Damage Scaling charts which does continue from the amount of hits leading to the stun.

A Focus Attack, when timed correctly, can be used to "cancel" a special attack; this is known as an EX Focus and takes two bars of the four-section Super Combo Gauge. For example, during the first hit of Ryu's Shoryuken, a player can quickly input a Focus Attack to cancel the rest of the move's animation. This is useful if the player only needs the first hit of the move and does not want to, for example, risk being counter-attacked by an opponent who can recover from the attack quicker than the move can finish. It is also useful for continuing a combo by executing the focus attack or else through "dash canceling", which is explained below. Although an EX Focus Attack can be charged like the regular version it does not have Super Armor properties.

A normal focus attack can be canceled by dashing (quickly tapping forward or backward twice). This also applies to EX Focus attack; the latter is known as a Focus Attack Dash Cancel (commonly abbreviated to FADC) or simply a Focus Cancel. Focus Canceling is a relatively high-level tactic which is often used to string together large combos. Continuing with the previous example, Ryu could cancel his Shoryuken with a Focus Attack, dash cancel the Focus Attack by dashing forward and continue performing attacks while the opponent is still in the air from the Shoryuken, such as a Metsu Shoryuken. Another common use of this technique is to "make [an attack] safe". This is accomplished by executing an attack and, if blocked, performing an EX Focus and backdashing so that the player is out of range of potential counterattacks.

C. Viper's Focus Attack is included among her special attacks in the game. It works similar to Street Fighter IV wherein she can absorb a single hit of most attacks and be charged up to three levels for the same types of effects as seen in IV (basic attack, crumple knockdown, and unblockable).

Both Ryu and Chun-Li's Focus Attack are special moves in the game.

Ryu is able to use his Focus Attack as his Down Special attack. It works the same as it does in Street Fighter IV, allowing Ryu to absorb damage in order to stun the opponent. It deals a high amount of percent damage and can also slow Ryu's fall through the air. The main differences from the Street Fighter IV version are that Level 1 will not cause a crumple in any situation, while the Level 3 Focus Attack causes a longer crumple than Level 2; in addition, the Focus Attack can be reversed (as an adaptation to Smash Bros.), and an enemy who is hit in the air by a Focus Attack will be left shaking in place, suspended in the air until knockback is applied.

Dash Canceling can be performed even in mid-air, giving Ryu maneuvering options.

Rather appropriately, Akuma's Focus Attack animation from Street Fighter IV serves as his Power Crush, allowing him to absorb attacks in order to retaliate without being hit out of it. Dash Cancels are possible as well by using one segment of Akuma's super meter.

As Ryu returns as a part of the roster, he keeps his moveset from the previous Smash Bros. game with him. Ken debuts as Ryu's "Echo Fighter" and as such, uses Focus Attack as well; Ken's animation for the attack appropriately uses his distinguished kicking animation from Street Fighter IV. In Smash Bros it allows Ryu to completely change his aerial trajectory. 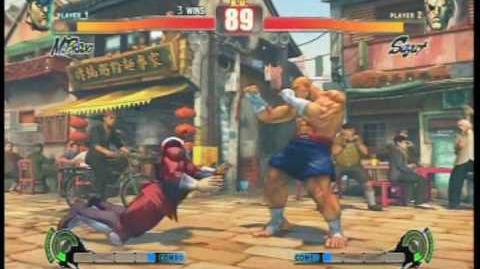 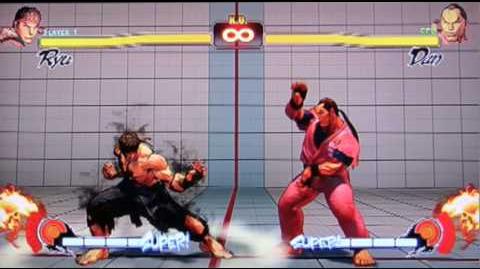