This article is about defining what a Frame is in relation to Street Fighter, for information on how attacks work see Frame Data.

A frame refers to a scene in in moving media. In Street Fighter it means a single scene in battle, In motion frames are usually used to describe how long an action takes to start, and finish, but another way it is used is the current state a character is in due to the actions of either player.

Frames are usually used to describe the length of an action, the most often being the startup of an attack. However every attack has a total length from start to finish and can vary if it is blocked on hit. Main series console Street Fighter games tend to run at 60 FPS (frames per second) and every action is based off this number, some odd actions can occur if the machine can not handle this performance (usually poorer PC's or Laptops suffer from this issue, in the laptop's case it is usually because of heating issues).

In Street Fighter some properties and gameplay elements have their own names.Usually these are named differently depending on what is going on at any given time during a battle.

These frames are more common on more modern games, usually after Street Fighter III. Introduction frames are the frames that play before the battle start. Usually these are meant to reflect the personality of the selected character before the battle. Some games introductions that differ depending on the two characters who are about to do battle and others (such as the one shown here) has exclusive introductions for when two default partners are selected together. Most games do not allow the player to perform any actions aside from skip. One notable exception is Urien's introduction in the Street Fighter V series where a button combination will make him change to his classic costume, despite the outfit selected.

These are the majority of a fight in Street Fighter. During this time both players are in full control of their characters. The only restrictions tend to be bars such as the Super and Ultra bar for instance in that certain actions can only be performed depending on how full they are. Aside from that usually both players are free to do whatever they want.

Some characters have varying level of unique restrictiveness, Such has Hakan having to worry about his oil level. In most cases these are integrated into the character's gameplay by getting "free" chances such as Hakan's Oil Slide second followup to "top up". Others such as Ibuki's unique Kunai mechanic doesn't have a fully safe way to refill her Kunai once used without being punished meaning once all Kunai are used then Ibuki would be a severely handicapped character.

Usually when Frame Data is considered for an attack with any sort of cutscene before connecting Cinematic Startup is calculated. Cinematic Startup is the amount of time (in frames) the attack has before the actual startup of the attack begins. For example, when a character performs a Ultra Combo or a Critical Art, a cinematic cutscene occurs as they declare their attack or prepare for their selected move. It is after the cinematic start up frames that the actual startup frames (like regular attacks) begin. For example E. Honda's Orochi Breaker has a 1-frame startup in Ultra Street Fighter IV. This means after the cinematic start up the move grabs his opponent in one frame. However, since it can not grab jumping frames, the opponent can jump out before the attack become active. In comparison, Zangief's Ultra Atomic Buster is has a 0-frame startup. This means it is instant after using it, this is the reason why if the opponent was not invincible or airborne before Zangief used this attack they will be grabbed without his opponent being able to get out.

Cinematic Frames are the frames that some attacks such as a character's Ultra Combo, or Critical Art after it successfully connects. Usually the connecting character will do a sequence that is suited to their fight style. Usually neither player has control during these style of attacks and the sequence is pre-scripted. If Camera Mods are used it can be seen in order to insure successful connection hit opponents are teleported to the character in offense to ensure the whole sequence connects. There are some sequences such as Space Opera Symphony that can drop even though the cinematic successfully connects but these tend to be rather rare. In Street Fighter X Tekken the Tekken character King actually could change the ending of his super art depending if the player does a specific combination during his Super, the regular version ending in a sharpshooter and the second one being a muscle buster.

Airborne Frames are frames that the character's hurtbox is considered to not be grounded but in the air. During these frames the character in question isn't throwable unless the throw is specialized to hit aerial hurtboxes When in this state being hit by an attack that isn't specifically designed to be a hard knockdown will either Air Reset or Juggle the opponent depending on the property asigned to the attack in terms of interacting with aerial hurtboxes. While Jumping is the most common way to get in this state some characters do have grounded attacks that make them go airborne. It should be noted that while the character's feet leaving the ground is a good indicator of airborne frames it is not always the case as Cody's Crack Kick in most appearances is still considered grounded thus throwable.

Called "Squat Frames" in some games, these refer to the amount of frames it takes for a character to do their regular jump. These depend on the character doing it, Ibuki's for example has 4 Pre-Jump frames. These frames are unique as the character can not be thrown but will be still grounded if hit. Air throws or aerial exclusive hitting attacks will not hit a character in this state yet however since these frames are not that long it is likely since they will be jumping so long the hitbox of the other attack is still active the character in prejump frames will still connect. These frames can also enable characters to jump cancel or for those like Ibuki with a Super Jump super jump cancel into any non normal or unique action, including Ultra Comboes in SFIV and Pandora in Street Fighter X Tekken.

In most games and in most instances throw frames can be treated exactly as cinematic frames. Like said frames they complete a sequence and in most cases neither character can perform any actions (except tech a throw for instance in Street Fighter V). An important difference is that while throw frames might even have their own cinematic angles they do not interrupt the battle. This is more noticable in games that support 2V2 such as SFXTK's Scramble Mode.

When Super Arts or Cross Arts are used in that game mode no player can perform any action as the game doesn't show the partners until the sequence is over. However with throws the partners can still perform actions. In these modes despite having an active partner there is no "save" mechanic, meaning once a throw begins the partner can not stop the sequence or "catch" a partner. However it should be noted some throws such as Ibuki's Tobizaru actually make her hurtbox appear before the player can take control of her meaning in these game modes (or Cross Assault) the hit character's partner can punish her even on hit.

Starting with Street Fighter Alpha, hitting an opponent when they are starting a non invincible attack usually leads to a Counter Hit. Counter hits usually leave to higher Hitstun or might have other unique benefits. Capcom sometimes makes some attacks not have any counter hit frames such as Ibuki's LK Kazekiri when she debuted in Street Fighter V (though this was later changed). Through balance changes this attack and others sometimes get their timings for counter hit changed to be different from the norm.

Some games also have their own Counter Hit frame mechanics. Most invincible reversals in Street Fighter V for example are programmed so that any hit during the attack including the recovery frames will result in a counter hit to ensure optimal punishes for throwing out such attacks wrecklessly.

Recovery Frames refer to the amount of time an attack takes in comparison to how long it will take for the player to regain control of their character. Most attacks for example have a startup-active-recovery time, all those numbers can make up the overall recovery frames in that the whole sequence makes the player lose control of their character temporarily so they perform the action. Recovery Frames are also usually used exclusively to talk about how long an attack can take after the active frames in some context.

For some attacks such as Ibuki's Kazekiri artificial recovery frames are added when the character hits the ground. This is to ensure the attacks will be Punished if used without Hit Confirmation. Command Grab style attacks and attacks that emulate them such as Ibuki's Raida have long recovery times should the hitbox whiff. This is to encourage grappler players to alternate between regular and command throws. For Raida's case since the attack emulates the recovery of a command grab the attack is very unsafe on block.

Super Flash is very similar to cinematic frames. This was a mechanic in the Street Fighter IV games that indicated the opponent activated their Super Combo. In most previous games the action would momentarily pause the action very similar to Cinematic Frames but this game in particular the Super Flash actually tacks on to the attack's startup Frame Data. This essentially makes super comboes slightly worse punishes than their ultra equivalents as even if the attack itself that comes after the flash is instant activation the Super Flash could make the action take just enough start up frames to allow the user's opponent to escape.

Charge frames are frames that in Street Fighter usually involves either, holding the input, re-inputting the input, or moving the joystick. A typical charge move like Ibuki's Tenrai simply requires the user to hold the input buttons for the full power. Usually when the action is a direct attack holding the button for the full amount causes a stronger variation of the attack while the charging frames can either give 1 weaker version or different power depending on the frames the input were released.

The other version is like Ibuki's Makibishi. where the attack is charged but requires the user to re input the V-Skill to have her release early. If released early Ibuki only throws a single spike, if the attack is released somewhere between the fully charged version and the non charged she will release two spikes and if the charging is left alone to complete she will throw three spikes. 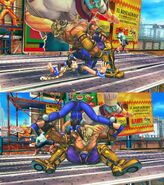 As stated, King's Super Art ending changes depending if the opponent pressed a button combination during the sequence. The top is the default ending with a sharpshooter and the bottom is the more damaging Muscle Buster variant. Shown here against Ling Xiaoyu.

As Zangief's Hammer Knee gives him airborne frames he can be hit by attacks that only hit jumping opponents such as Ibuki's Tobizaru.
Add a photo to this gallery
Retrieved from "https://streetfighter.fandom.com/wiki/Frame?oldid=219074"
Community content is available under CC-BY-SA unless otherwise noted.