Garuda (ガルダ, Garuda?) is a video game character from the Street Fighter EX series, first appearing as a non-playable boss in Street Fighter EX before becoming playable in its update, Street Fighter EX Plus. He is a demonic being clad in samurai armor capable of absorbing negative energies to strengthen his own power.

Garuda appears in Fighting EX Layer, a spritual successor to the Street Fighter EX games featuring the original characters from said games that were created by Arika.

Garuda is adorned in reddish-orange rusted samurai armor, and wears a horned helmet with a demonic-looking skeletal mask. He has a wild mane of blond hair, and pauldrons on either side of the armor with designs resembling demon faces. Garuda's armor is adorned with a gold belt with two tassels attached, and he wears blue hakama pants along with red vambraces and greaves with open-toed sandals.

His appearance is said to change depending on who observes him, so it is unknown if this is his true form.

In his Shadaloo Combat Research Institute profile artwork, Garuda's hair is white, his armor is a red hue, and has blue laces woven throughout it. His belt is more pronounced, and his armor is decorated with golden ornaments in several places.

In Fighting EX Layer, Garuda hair remains blond but glows orange in-game. His mouth glows in yellow. His kimono shirt is navy blue, his red genji greaves from his armor reaches to his knees and his red shoulder armor has a silver trim that glows in a gold hue. He also gains a steel-like tail ends in each sides at the back of his shoulders. His navy blue hakama now have gold flame designs and wears a red genji boots are now demonic. He also wore red genji gauntlets that shows his demonic hands which also glows glowing orange.

Due to his mysterious and otherworldly nature, Garuda's personality is not well-defined, however, he seems to be fairly bloodthirsty, seeking out opponents who utilize destructive forces such as Psycho Power and the Satsui no Hado. Garuda is said to be composed of negative emotions and dark energy, and bears a considerable amount of strength, rivaling even Akuma in terms of power.

Garuda was once a man who protected his village from an unknown threat and was hailed as a hero, but he lost his way and was overtaken by dark forces, becoming a demon. It is unknown what exactly caused him to turn to his present form, but in his current state, he exists through the power of negative emotions.

Garuda first appears as a secret boss in Street Fighter EX, shown being awakened in his Street Fighter EX Plus α ending by the presence of Akuma and Evil Ryu due to their use of the Satsui no Hado. He is said to wander eternally, and his power fluctuates based on his opponent, increasing in strength against those who seek to become stronger, and becoming a being filled with hatred against those who hold a grudge.

Garuda reappears in Street Fighter EX2, this time seeking out the soul of a blood relative. During the events of the game, Skullomania discovers the existence of Garuda, and sets out to defeat him, believing the demon to be a villain bent on world domination.

"Death suits you well!" Requesting "strength", the memories of these men continued suffering due to the dark power they were consumed by. Will their souls ever find the tranquility they seek? The suffering of men obsessed with the Satsui no Hadou continues.

There weren't any sufficiently adequate words to describe who he fought. Was it a new form of himself that did not know of yet? A dark side of himself hidden within him that he did not realize until it materialized? Or some kind of skill that he didn't know he possessed until now?
And yet, he felt a very different spirit and sense during the fight.
"Are you truly yourself...?"
The answer to this question became an eternal mystery...
[2]

He's the man-demon who controls an aura of negativity. A demon whose appearance differs with each person who has seen him. A demon who will wander for all eternity.

Is life a dream? Is really an illusion? Are there an end and a beginning? There is only one thing that Garuda is certain of... time catches up everyone.

Garuda appears as one of the playable characters in the spiritual sequel to the Street Fighter EX games. He is sealed inside the body of Hayate, but he ends up corrupting Hayate. He is revealed to have been manipulating Doctrine Dark.

Most of Garuda's special attacks make use of blades protruding over his body. He can also summon spirits as part of one of his Super Combos. Like Hayate, Garuda is also a master swordsman; he has a sword hidden within/on his body, which he uses as part of his Meteor Combo.

In Fighting EX Layer, he retains all of his moves from the Street Fighter EX series. The spike-like blades protruding over his body are replaced by sword blades that resembles his sword, and he can unleash curled up blades to brutally incapacitate and burn his opponents in his Super Combo. 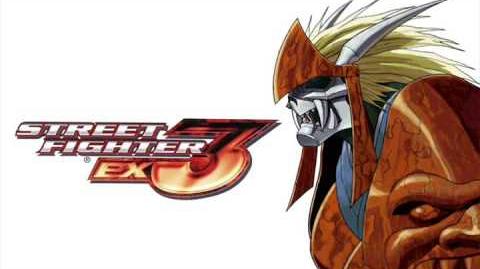 Retrieved from "https://streetfighter.fandom.com/wiki/Garuda?oldid=230205"
Community content is available under CC-BY-SA unless otherwise noted.