"Come at me from whatever direction you like! (どこからでもかかって来い！, Doko kara demo kakatte koi!?)"
—Fei Long

Executed by performing two quarter-circle forward? motions and pressing all 3 kick buttons, Fei Long changes his stance, turning his back to the "camera".

If his opponent strikes him directly, he counters by delivering a devastating jump kick to the back of their leg, temporarily stunning them. He then proceeds on to deliver a series of powerful punches while standing side ways. Fei Long then switches sides, places his fist on the opponent's chest and finishes them off with the famed one-inch punch.

The move has to be timed right, and upon connecting it, the user is rewarded with a lot of damage. Upon being activated, Gekirinken has a two-second recovery rate. Like all counters, the move itself is very useful in avoiding rushdowns, pokes and frame traps, and can also be used as an anti-air to punish opponents who try to jump in.

However, the Gekirinken is at a disadvantage against projectiles, armor breaking attacks and throws, like all counters. Thus, it must be used wisely and timed carefully. As such, the Gekirinken is a solid choice against non-grappling characters that rely on close-combat.

The term Gekirin is the Japanese rendering of the Chinese term Nilin, which references the scales of Eastern dragons: if the specific scale on their chin is touched via moving it the wrong way, they can turn from harmless and benevolent to hateful and enraged in an instant, destroying the one responsible in the most painful manner possible. This is often compared to poking at a monarch's weak sides to earn their unforgiving wrath, no matter how friendly or composed said monarch is, according to the philosophy written in the Han Feizi.

Tying into this, the Han characters (hanzi/kanji) for dragon (竜 or 龍) can also be taken to mean "imperial". Other mythological creatures of Eastern Asian folklore also have similar motifs of being docile beings that end up in an unforgiving-fury if provoked in a certain way. 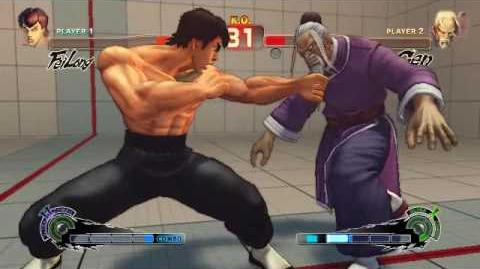