Genryusai (源柳斎, Genryūsai?) is a Japanese family from the Final Fight series. The founding clan of Bushinryu, the Genryusai family played in important role in the lives of Guy and his future sister-in-law Maki Genryusai.

The Genryusai clan is the original clan that founded the Bushinryu in the 15th Century. As the Soke (宗家 main family) of the Bushin Ninja Clan, the Genryusai family has organized many of their clan's activities. This would continue up until the Meiji Restoration, where many shinobi clans struggled and even disbanded. The Bushinryu's arts became obsolete and less effective as the tradition had stagnated. It would be until the Genryusai's patriarch, and 37th generation Master would come to train Zeku, his best student and 38th Bushinryu Master, that the direction of Bushinryu would change.

After the passing of the elder Genryusai, Maki, the second daughter of the late Bushinryu Master has been seeking Guy, determined to prove his superior and become the 40th Master of the Bushinryu clan.

The elder Genryusai is a master of Bushinryu. He has two daughters named Maki and Rena. In Final Fight 2, Genryusai and Rena were kidnapped by the regrouped Mad Gear Gang. When Maki learns of this, she calls Haggar to help her rescue them. The two and Carlos manage to free them after defeating Retu.

Genryusai is mentioned in Maki's ending from Capcom vs. SNK 2: Mark of the Millennium 2001, where Maki started searching for Guy after her father's death to see who is more qualified to be the next master.

He was presented as Guy's master, but when the Street Fighter Alpha series established that Zeku had taught Guy instead, this was retconned as Genryusai having been Zeku's master instead of Guy's. 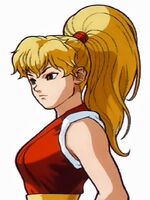 Rena (麗奈, Rena?) is Genryusai's daughter, Maki's older sister, and Guy's fiancee. Like her father, she was kidnapped by the Mad Gear gang and later rescued in Final Fight 2.

Guy, Rena, and Maki
Add a photo to this gallery

Retrieved from "https://streetfighter.fandom.com/wiki/Genryusai_Family?oldid=235365"
Community content is available under CC-BY-SA unless otherwise noted.