Goutetsu (轟鉄 / ゴウテツ, Gōtetsu?, "Roaring Iron") is a non-playable character in the Street Fighter video game series. According to the backstory introduced in Super Street Fighter II Turbo, he was the martial arts master of Gouken and Akuma, who trained them in the martial art style they used. The style would become the basis of Ryu and Ken's fighting style.

Goutetsu's name comes from Street Fighter II: The Animated Movie (which was produced at the same time as Super Turbo), where it is the name given to Ryu and Ken's master. Capcom adapted the name Goutetsu for Gouken and Akuma's master, instead of being another name for Gouken.

Goutetsu was the martial arts master of Gouken and his brother Akuma and was also a user of the Satsui no Hado, being the only known person who could use the power without falling into its darker aspects (possibly because he only used it sparingly and wisely). This was also how his two students were introduced to its power.

Prior to the events shown in the Street Fighter games, Goutetsu was challenged and killed by Akuma, at his full potential, who performed the Shun Goku Satsu on his soul in a fight to the death. Goutetsu gladly died, happy to see that his student surpassed him in the art. The prayer beads that Akuma wears originally belonged to Goutetsu.

Goutetsu can be seen in Akuma's ending along with Gouken in the original Street Fighter Alpha; this was his only on-screen appearance in the series.

Goutetsu appears in Street Fighter Origins: Akuma It was revealed that Goutetsu had originally a group of students who were well versed in the Hado, at some point, many of his students, such Gyuki and his first generations of students, were almost possessed by the Satsui no Hado and had turned into Assassins, eventually, they turned against each other due to the evils that was caused by Gyuki. Goutetsu saw the potential threat of what could happen if someone was not able to contain the Dark Hado with light, had sent a group of men to find Gyuki and his hiding spots to take him out.

During the winter in Japan, he and Retsu found a young Akuma who was badly wounded from a bear attack. He took Akuma back to his dojo to help heal him, as Akuma woke up, he asks him where is he, Goutetsu tells him that he has no where to go and that he heard about Gyuki, his father's murder, Goutetsu told Akuma that he once trained his father, after a long talk, Goutetsu told Akuma that he would find his brother, Gouken, Akuma however told him that Gouken did not want to be found and that Akuma wanted to know all about Ansatsuken and its techniques. Goutetsu agreed to train him, before he did so, he asked Akuma what is it he wanted to seek, Akuma told him that he wanted a path of his own.

Many years later, a business man who hosts tournaments came to Goutetsu's dojo in order to find Akuma, Goutetsu told him where to find Akuma. Later that night, Goutetsu noticed that Akuma was troubled, and he asked him to come inside the dojo to tell him what is wrong, Akuma told him that he wanted to know more about himself, and left the dojo in order to find himself the very next day. Gouken appeared right in front of Goutetsu and his dojo to thank him, and asked him to train him in order to grow stronger as a person, which Goutetsu agreed to.

Five years later, Akuma came back to Goutetsu and the dojo to train again in order for him to become the perfect warrior, Goutetsu told him that he must go into the mountains in order for him to find out who he truly is. When Goutetsu was training other young students on the art of Ansatsuken, a demonic-looking Akuma under the influence of the Satsui no Hado looks at him with rage. Goutetsu told Akuma to abandon the power like his father did before it corrupts him completely. Akuma told him that he finally knows about how his father was killed and tells Goutetsu's time has come, the two engaged in a fight, as Goutetsu told him about how dangerous the Satsui no Hado was if fully embraced, and told him that he cannot stop fighting. He pleads him to stop and asks him what he truly wants from this fight, only for Akuma to reply that he wants him to prepare for death. Akuma kicks him in the air with the Demon Armageddon, kicking Goutetsu through the dojo roof, killing him.

As a vestige of gratitude for all the years spent under him, Akuma takes his body to a mat under a tree and respectfully lies him down.

Goutetsu is referenced by Ryu in his memories as seeing him and Gouken as a boy.

Goutetsu has an important role in the animated movie: he is shown fighting Akuma at the beginning, and is revealed that he has tried in vain to dissuade his student from delving deeper and deeper into the power of Satsui no Hado. While Goutetsu himself proved able to tap into its power, unlike Akuma, he didn't seem to suffer from its side-effects, likely because of his more balanced approach and rarer use. Unlike his game appearance, he is depicted as having short hair and a very small stature.

In keeping with his established backstory and depiction, he is shown as the old and diminutive master of Gouken and Gouki (the original name of Akuma), teaching them in the "old ways" of Ansatsuken to overcome and destroy the opponent, but also preaching about finding balance between the light and the darkness. As Gouki immersed himself in the study of the Satsui no Hado, Goutetsu ordered him to leave the dojo; when Gouki resurfaced as Akuma, Goutetsu challenged him to try and stop him, but was defeated and killed by his former student. He is also depicted as having a niece, Sayaka, who served as a love interest for both Gouken and Akuma. 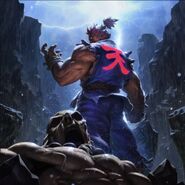 Teppen: Mastery of the Hado