Guile's Invisible Throw is a glitch found in early arcade versions of Street Fighter II. If done properly, this glitch allows Guile to throw the foe without even touching them. In some cases, this is considered a "cheat."

This glitch also has another version in which he can feint an invisible throw. To do this, perform the same inputs as normal, but this time, the fierce and roundhouse buttons must be released within 4 frames of the animation. Doing so will cause Guile to perform the throw animation, but it won't affect the opponent at all.

Like mentioned earlier, the invisible throw glitch can be done infinitely, making this an easy and cheap way to win rounds, and even the entire game including the bonus stages. As a throw, Guile is completely invincible upon startup, and the throw is completely inescapable. Some setups for the invisible throw glitch include a series of crouching light punches as well as a Flash Kick when used as an anti-air. The throw can even be used to interrupt certain moves, as for example, Guile can throw Vega off the cage and Blanka can be interrupted during his Rolling Attack. After performing the Handcuff Glitch, performing an invisible throw will bring the opponent's state back to normal.

If Blanka is interrupted during his Rolling Attack, this can cause massive damage, as in early versions of the game, Blanka is given 60%+ damage if he is hit during a rollerball. This can be an advantage for Guile if facing a Blanka Player / AI. 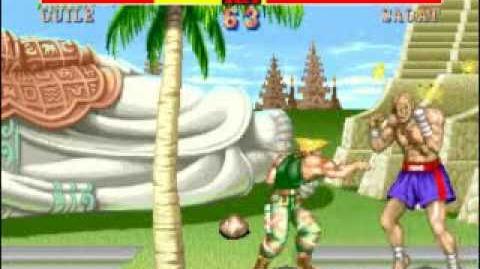