Guy's Henchmen are a group of ninja working for Guy in Final Fight: Streetwise. The eight henchmen are skilled genin wearing a red uniform similar to Guy's, and some are equipped with a Katana. They are voiced by Naoki Hayashi and Ryuhei Tanabe.

When Kyle finds an old photo of Guy dropped by Cody, the only part visible is Guy's tattoo. After talking about it with Paco, Kyle goes to Lou's Tattoo Parlor to find info about it. Lou knocks out Kyle and takes him to the basement, and as Kyle doesn't answer their questions, Guy orders eight of his henchmen to face him, but the eight and Lou are defeated. When Guy prepares to face Kyle, Kyle explains who he is and why he was after Guy, leading to Guy helping in his quest. Guy sends some of his men to investigate Little Italy, as glow's influence appears to be stronger there. However, his men are killed, with Blades appearing with the head from one of them and throwing it at Guy and Kyle alongside an explosive, almost killing the two in Guy's mansion. Later, two of Guy's henchmen can be seen outside his mansion, and Kyle can participate in pit-fights against Lou or Cammy by talking with one of them.

Guy's Henchmen are given a random name: 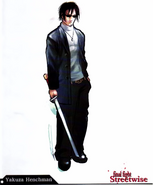 Add a photo to this gallery
Retrieved from "https://streetfighter.fandom.com/wiki/Guy%27s_Henchmen?oldid=188029"
Community content is available under CC-BY-SA unless otherwise noted.