The Hadoken (波動拳, Hadōken?, "Surge Fist" or "Wave Motion Fist") is a special attack that originated in Street Fighter. It is often referred to as a "fireball" due to its appearance, despite few instances of the move actually producing flames. It is one of the most famous special moves in the Street Fighter series, along with the Shoryuken and Tatsumaki

The basic type of Hadoken is a surging punch in which a fighter's willpower is utilized to focus energy into and through the palms. As the palms are thrust outwards towards the target, a surging energy wave is expelled that results in a punching force traveling through the air in the opponent's direction. In some games, the projectile will have actual "energy hands" inside it. According to the Street Fighter II Official Fanbook, the Hadoken is said to be as warm as normal body temperature, contrary to popular belief that it is a fireball. Depending on its practitioner as well, its force of impact varies; Ryu's Hadoken is said to feel like a hard kick and its pain lingers, while Ken's is said to be like a hard punch but is brief in pain.

The user will usually be immobilized for a short time after performing this move, leaving them vulnerable to counterattack. Certain crossovers allow the basic Hadoken to be used in midair.

The primary use of the Hadoken is to control the horizontal playfield: if thrown at the opponent, they will have to block, jump or use a special attack to counter. In any case, they will have to act, allowing the player throwing the Hadoken to potentially counter. The speed of the Hadoken is determined by which punch button is pressed. The Light Punch version travels the slowest, while the Heavy Punch version travels the fastest. The EX version hits the opponent twice, leading to a knockdown.

Alternatively, the opponent can perform a projectile attack of their own, negating the Hadouken.

Takashi Nishiyama, the creator of the original Street Fighter, credits the 1970s era anime Space Battleship Yamato, in which the titular battleship has a weapon called the "Hadōhō" ("Wave Motion Gun/Surge Cannon") as the origin of the Hadoken.[1]

The Hadoken may have also been inspired by the "Kamehameha" from the Dragon Ball series, which was created in 1984. Both have identical hand movements (the way the hands are placed is slightly different between them), and are fired the same way. They are also similar in appearance (the Kamehameha is a laser-like beam, much like the crossover versions of the Hadoken).

Ryu focuses more on the Hado principle of the fighting style, which makes him very skilled with his usage of ki. Some of Ryu's more powerful attacks are variations of the Hadoken technique. As time progressed, Ryu's version became the most outstanding of its practitioners, with superior speed and recovery time compared to his rivals.

In some games, he has an exclusive "fake-out" Hadoken, executed by doing a quarter circle forward and pressing the taunt button and is known as the Hado no Kamae (波動の構え, Hado no Kamae? Stance of the Surge). By doing so, Ryu will simply do the hand thrusting motion for a Hadoken, not firing it.

Ken is also a student of Gouken alongside his partner and best friend Ryu. However, although he possesses the ability to manipulate ki, he has chosen to focus on developing moves and techniques more in line with his speed-oriented fighting style. He is a little faster than Ryu, but not as strong in Hado arts.

In the crossover games, he gains various types of Hadoken, such as the Shinku Hadoken.

Evil Ryu has access to many versions of the Hadoken that his normal counterpart have.

Akuma infuses his Hadokens with the Satsui no Hado, giving them the potential to truly kill an opponent. Akuma is the first to demonstrate the ability to use the Zanku Hadoken. Given the amount of Hadoken variations Akuma can conduct, he appears to be far more proficient in this move than Ryu.

Cyber-Akuma, due to his cybernetic enhancements, soundly surpasses Akuma. His Gohadokens and Zanku Hadokens, dubbed Bolt Hadoken and Zanku Bolt Hadoken are much larger visually, more damaging, and have lesser startup and recovery. Like Shin Akuma, he can launch two Zanku Bolt Hadokens at once. His variation of the Tenma Gou Zankuu, the Thunder Gou Shower, has him send down a barrage of 32 Bolt Hadokens at once. His counterpart to the Messatsu Gou Hadou is the High Mega Gou Beam, which is more damaging than the original with almost no startup.

Akuma's Hadoken variants change after his transformation to Oni; he now fires a one-handed Hadoken similar to Gouken, which can also be charged. Fired uncharged, the Hadoken will only travel part way to the opponent but at a full charge, they can cover the full range of any Hadoken. Oni also possesses the Gorai Hadoken, which replaces the Shakunetsu Hadoken, and is filled with electricity instead of flames.

He also possesses a stronger version of the Messatsu Gou Hadou, called the Meido Gohado. This massive Hadoken can be fired in 3 ways: on the ground, horizontally and vertically, or in the air, at a downward angle. Each variation bears a different name: Meido Gohado (shot straight), Messatsu-Gotenha (shot upwards), and Messatsu-Gozanku (shot down from the air at the angle).

Sakura Kasugano has an imperfect Hadoken, since she is not trained in the Hado-style and instead learned by imitating Ryu. She can charge her Hadoken, though the longer she charges, the shorter it reaches. Even with no charge, the projectile does not go too far. However, the damage it inflicts is great. It also gives her a frame advantage on block. Sakura also has the Tengyo Hadoken, which she can fire diagonally upwards as an anti-air attack. She also has the Nekketsu Hadoken, where she immediately charges the Hadoken with a pink color and fires it with great force and speed.

Sean Matsuda appears to have a powerful Hadoken, but it is not fully mastered yet, and he has yet to fully understand how to manipulate ki. Unlike the other fighters, who have the original technique and some variations available for use, Sean has the Hado Burst Super Art as his only projectile.

Allen Snider has a self-developed Hadouken based on Ken's.

Dan Hibiki uses the Gadoken, which is a move likely based on what little of the move he learned while training under Gouken. He gains the Shinku Gadoken with the similarity of a Shinku Hadouken except it is a short distance fireball to close-range combat. He also gains the Haoh Gadoken in Super Street Fighter IV, which is similar to Ryu's Shinku Hadoken, and also parodies the Haoh Shoukou Ken used by Ryo in Art of Fighting and The King of Fighters. The distance of a regular Gadoken depends on how strong the punch button was pressed. Also, Dan can use the EX Gadoken, which boosts the range of the blast.

Gouken deploys Hadokens based on his belief that martial arts were meant for self-defense. He uses only one hand for his regular Hadoken in Street Fighter IV (a reference to the "Sheng Long" rumors), and can also fire them straight as well as upwards (depending on the strength of the punch button pressed). His Hadokens can also be charged by holding down a punch button after executing them. The EX version involves him firing two Hadokens at the same time, with one going straight and the other in the air. He does, however, use 2 hands for the Denjin Hadoken, in order to control the Hadoken while he charges it before releasing.

Kage also uses the Hadoken. Similar to Akuma, he infuses his Hadokens with the Satsui no Hado. Kage can fire the Hadoken slightly faster than Ryu. However, one of the difference is that Kage releases the Hadoken with one hand. The dark energy also does not leave his hand, similar to M. Bison's Psycho Blast. The EX version does put the opponent in a crumple state, giving Kage a free opportunity to extend the combo and inflict more damage.

He also can release the Hadoken while airborne, similar to Zanku Hadoken, except that he can only do so after jumping forward. Only this time, when Kage fires the Airborne Hadoken, it travels horizontally across the screen, compared to Akuma's who releases the fireballs at a downward angle. 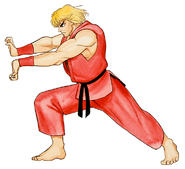 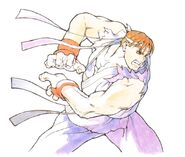 Ryu releasing a Hadoken in the Marvel vs. Capcom series. 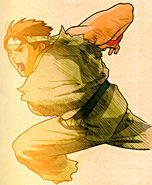 Portrait from Marvel vs. Capcom 2 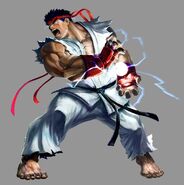 A screenshot of Ryu and Ken's Hadoken in Street Fighter IV.

Ryu's Hadoken in Marvel vs. Capcom 3.

Ryu charging up a Hadoken in Street Fighter II: The Animated Movie.