His wife, his daughters, chanko, oil

Cigarettes; fire; industrial espionage; S.I.N., for building weapons; others claiming that their style is superior to his

Hakan (ハカン) is a character in the Street Fighter series. He made his debut as the tenth and final new fighter in Super Street Fighter IV. He was revealed by IGN on March 9, 2010. The character was created specifically to be "something that was never seen in a Street Fighter game before." The creators searched for an interesting new fighting style on websites such as YouTube to come up with a new off-the-wall character akin to Blanka or Dhalsim.[2]

Hakan is the first Turkish character introduced in the Street Fighter series.

Hakan is the president of the world's leading edible oil manufacturer and a leader in Turkey's national sport of Yağlı güreş. He enters the S.I.N. tournament to showcase his skills, while also travelling the world in search of inspiration for a new oil recipe (after beating up and interrogating a trespassing thug whom he accuses of being an industrial spy).

During the tournament, Hakan encounters E. Honda, who is revealed to be an old friend. Their meeting gets competitive when each claims that theirs is the best fighting style in the world, and a match ensues. Honda loses and acknowledges that it was a good fight, but warns Hakan not to expect him to lose next time as he leaves. Hakan then muses that Japan has a number of different oils, and tells his family that they are heading to Japan to expand their business.

Hakan is a huge Turkish oil wrestler with deep red skin and a strong accent. He has strange turquoise hair worn in circular curls aligned rather symmetrically on his head and a large mustache. He wears a large belt that not only bears a golden lion's head as its buckle, but also cradles an enormous golden chain that links from belt to shoulderpad like a bandolier. He wears tight blue pants moderately similar to traditional Yağlı güreş garb, but they are adorned with golden ringlets and leather bands. He also wears wristbands and anklebands. Though not used or visible during combat, he can also be seen toting around a massive barrel, with a golden lion's head similar to the one on his belt emblazoned upon one end. The barrel contains a large quantity of oil, as can be deduced when he hoists it above his head and drenches himself with it at the beginning of each match.

A practitioner of Yağlı güreş, Hakan's moves revolve around the application of oil to his body. When he is "dry" he still maintains a slippery body and the same movesets, but when he applies oil, he receives many advantages such as sliding further on the ground during his slide attack, and having a longer range for his command throw. The application of oil makes him "glow" for a short amount of time, acting as a timer of sorts for his current oiling. Since his playstyle is based heavily on "oiling up" to achieve additional range, many of his attacks are designed to provide him the space needed to do so. 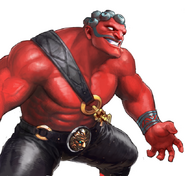 Hakan oil shower
Add a photo to this gallery

Retrieved from "https://streetfighter.fandom.com/wiki/Hakan?oldid=52010"
Community content is available under CC-BY-SA unless otherwise noted.