The Haoh Gadoken (覇王我道拳, Haou Gadouken?, "Supreme King Self Way Fist") is Dan's second Ultra Combo in Super Street Fighter IV. The move is an obvious parody of the Haoh Shokoken from the SNK side of fighting games, much like the rest of Dan's moves.

Executed by performing two quarter-circle forward motions and pressing all 3 kick buttons, Dan charges up a full-powered, two-handed version of his original Gadoken and shoots it at his opponent; after performing the attack, Dan is shown flying backwards, insinuating that the force of the attack itself was too much for him to handle. It is even stronger than the Shinku Gadoken in terms of damage, and hits six times.

Despite its enormous power, the distance of the attack is still very limited, just like the original Gadoken, thus preventing it from inflicting much damage at long range. In addition, the startup to the move is slow, and as the invincibility frames only covers the beginning portion of the startup animation, it is possible to hit Dan before the projectile comes out, limiting its already low overall usefulness. However, the post-attack roll can help prevent counterattacks, and it noticeably covers more vertical space. Also, due to the fact that Dan leans far back before launching the attack just after startup, it is possible for him to catch and punish most jump-ins with this Ultra Combo, crossup or not.

Dan and his opponent blasted away due to the impact of Haoh Gadoken.
Add a photo to this gallery 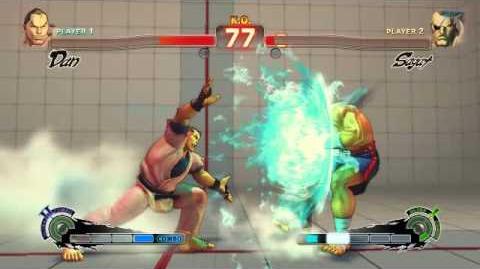