Executed by pressing Medium Punch and Medium Kick simultaneously, Sakura leaps toward her opponent. The command jump covers about halfscreen distance. This move works similarly to Chun-Li's Rankyaku. However, she only remains in front of her opponent if they are standing. While she can leap over her opponent when they are crouching, Sakura does not have a crossup attack that's part of her V-Skill.

Depending on which attack button(s) is used before she lands, Sakura performs a different follow-up. If there is no follow-up command, she just advances toward her opponent without delivering any type of attack. When paired with a fully charged Hadoken, she can create a few mix-up situations be quickly cancelling into her V-Skill to approach her opponent. With a fireball and an airborne Sakura coming their way, it can be difficult for the opponent to defend against her.

Sakura Otoshi is executed by pressing any punch button during Haru Kaze. Sakrua slams her fists downward in a hammerstrike. This attack can be performed up to 3 times, but only on hit. It is also one of Sakura's overhead attacks, including Floral Kick. Her opponent must be standing while blocking Sakura Otoshi. Hitting them with her punch follow-up results in a knockdown and frame advantage afterwards. In addition, this move can still be safe on block, depending on how low she connects with Sakura Otoshi.

Oukakyaku is executed by pressing any kick button during Haru Kaze. Sakura performs a front flip in midair, before extending her legs and comes down feet-first toward the ground. Unlike her punch follow-up, this dive kick is not an overhead. Even though this follow-up option has the longest startup, it is a safer attack than Sakura Otoshi. This move does not result in a knockdown. However, it can lead into a combo on hit. If she has her V-Trigger activated, then Oukakyaku can be used to extend combos after juggling her opponent with the amplified Shunpukyaku‎.

Kashinfu (花信風, Kashinfū?) is executed by pressing Light Punch and Light Kick, (the throw command) near his opponent during Haru Kaze. Sakura hooks both of her hands around the opponent's head and places her feet on their waist. Using her opponent's body as a platform, she extends and pushes out with her legs. The force of the kick not only causes Sakura to perform a back flip, but it also drives her opponent toward the ground, causing them to land on their back.

This attack is Sakura's only throw option during her V-Skill. While this move is not a command grab, it cannot be blocked. However, his opponent can avoid the throw by crouching or jumping. It is great for keeping the opponent guessing and breaking through their defenses. If she catches them standing to block Sakura Otoshi, then she can use Kashinfu to surprise them and inflict a respectable amount of damage damage. 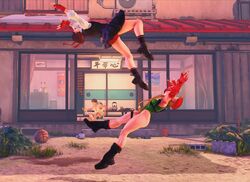 Haru Kaze > Kashinfu
Add a photo to this gallery
Retrieved from "https://streetfighter.fandom.com/wiki/Haru_Kaze?oldid=204968"
Community content is available under CC-BY-SA unless otherwise noted.