Executed by performing two quarter-circle backward motions and pressing all three kicks, Sakura quickly ducks down and performs the Haru Ichiban. If the high kick connects and launches her opponent into the air, she will then jump after them, performing a single-hit Sakura Otoshi. As the opponent hits the ground, Sakura will land feet-first on their body and jump off. The ending is in similar fashion to M. Bison's Nightmare Booster.

Super Gem Fighter Mini Mix introduces a more comical version that has very little (if anything) with the original attack. This version sees Sakura change her clothes into a fanservice bunny outfit, then some unnamed muscular men (who appear even more muscular than Zangief) appear and carry Sakura's opponent away out of the screen, then while not shown directly it is highly implied that the unnamed men beat on Sakura's opponent before throwing them back into the battle.

This move can pass through projectiles at startup, and can be used as sort of an anti-air attack if timed correctly, should an opponent perform an attack in the air. Players can also follow up after a Haru Ichiban, should the opponent block it. A side note is that if no other subsequent kicks landed and the opponent is hit with the last kick, the opponent will instead be sent flying to the other side of the screen.

Others combos with Haru Ranman:

Sakura about to fall on the opponent

Haru Ranman sequence on Gem Fighter against Ibuki.
Add a photo to this gallery

Haru Ranman
As it appears in Gem Fighter 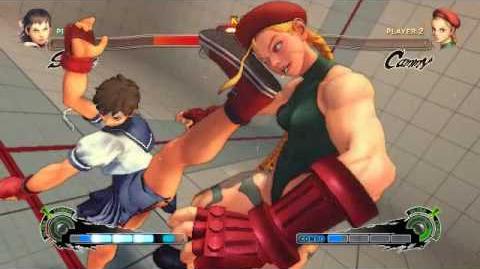