Hashinsho was replaced with Yami Shigure in 3rd Strike.

Ibuki throws a backhand fist, followed by a series of heel kicks ended by a kick similar to her close standing hard kick.

Ibuki starts the move with a backhand punch, then a heel kick that looks similar to her far Standing Heavy Kick, followed by a Kazegiri. If the kick connects with her opponent, an animation will ensue, wherein she will kick-jump from their torso and unleash a barrage of kunais. As the opponent attempts to block, the kunais chip away at their health, and Ibuki air-dashes towards them and grabs them, slamming them into the ground. 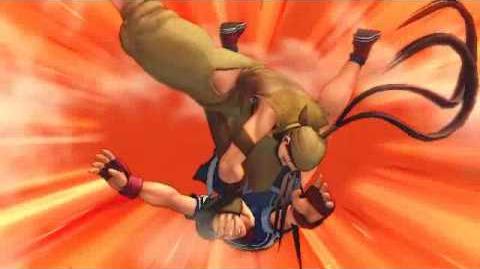 Hashinsho 2nd impact
Add a photo to this gallery

Ibuki finishing Akuma with Hashinsho.
Add a photo to this gallery
Retrieved from "https://streetfighter.fandom.com/wiki/Hashinsho?oldid=229233"
Community content is available under CC-BY-SA unless otherwise noted.