The Hayagake (疾駆け, Hayagake? "Rapid Run"), also known simply and colloquially as the "Run", is one of Guy, Maki's, and Young Zeku's special attack command dash, introduced in the Street Fighter Alpha series.

Executed by performing a quarter-circle forward motion and pressing kick, the user suddenly runs forward at full speed. If no further input is made, then they come to a stop when they reaches the opponent or the edge of the screen (or if hit). If, however, the kick button is pressed once more, then the user performs a follow-up attack.

What form this follow-up takes is determined by the kick button pressed at this point; the damage it does is determined by what kick button was used for the initial run. The EX Special version, introduced in Super Street Fighter IV, nets Guy Super Armor during the run, and the followup attack does more damage.

If Light Kick is pressed, the user comes to a Sudden Stop (急停止, Kyuuteishi?). This is useful for feints. For Young Zeku, this move is called Tozetsu.

If Medium Kick is pressed, the user performs the Shadow Kick (影すくい, Kage Sukui?, Shadow Scoop), which is a long sliding kick. This attack must be blocked low. For Young Zeku, this move is called Ashikari.

If Heavy Kick is pressed, the user performs the Neck Flip (首刈り, Kubikari?, Neck Reaper), which is a sidelong wheel kick. This attack must be blocked high. It can also be used as an anti-air.

For Young Zeku, this move is called Gekkou. He leaps into the air and performs an axe kick. During the kick, a trail of energy projecting from Zeku's foot creates a black slashing wave. A high-pitched, slashing sound of a sword plays as Zeku kicks. Similar to Neck Flip, this attack is an overhead and can be used to break through the opponent's defenses when they're constantly crouch blocking.. 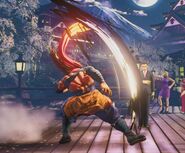 Gekkou
Add a photo to this gallery

Guy's Neck Flip
Add a photo to this gallery
Retrieved from "https://streetfighter.fandom.com/wiki/Hayagake?oldid=225046"
Community content is available under CC-BY-SA unless otherwise noted.