For other uses, see Hayate (disambiguation).

Hayate Kamite (紙手 疾風, かみて はやて, Hayate Kamite?)[1] is a video game character first appearing in Fighting EX Layer. He is a University student and the successor of the original Hayate, a playable character from the Street Fighter EX series.

Hayate has black short hair, with loose bangs on his forehead, and green-colored eyes (in-game they are amber).

He wears a dark blue bomber jacket with a gray trim and collar with its crisscrossed design, a pink short sleeved shirt which shows his lower abs and a dark blue mini tank top underneath, dark blue pants with gray crisscrossed designs at the edge, a dark brown belt and brown shoes. He is also adorned with a white genji pauldron with a gold trim and red spike designs on the right and purple designs along with a single light blue magatama design which it was embedded with glowing pink flames and matching genji gloves. Hayate also wears a necklace with three light blue magatama as a pendant.

Hayate Kamite is the descendant of the Hayate from the previous game.[2]

After he became a new guardian deity on his village, Hayate chooses to live a normal life as a University student. In the University League, He became unbeatable because of his swordsmanship skills while using his Sports Chanbara. After defeating Sanane at the Sports Festival, Hayate finally awakens his true purpose as a guardian deity and resolves his duty to seal Garuda.

Hayate fights using a katana like his predecessor as he has most of the latter's moves from Street Fighter EX2. He has a fast and agile playstyle, with his weapon being used in all of his moves except his normal attacks and his counter. His Oborozuki can absorb projectles and almost all of his specials (except for his Sorasen) can be influenced by the button's strength. His katana also has a burning appearance and glows in a variety colors instead of only red like in the Street Fighter EX series.

Hayate in his character artwork and backstory 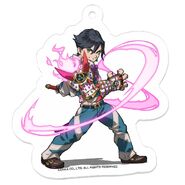 Art for an acrylic key chain.

Art for the Japan Fighting Game Publishers Roundtable 2 by Tamio.
Add a photo to this gallery

Retrieved from "https://streetfighter.fandom.com/wiki/Hayate_Kamite?oldid=235518"
Community content is available under CC-BY-SA unless otherwise noted.