Hideo is a person with a gentlemanly demeanor and a strong sense of justice. He leads a serious personal life; he doesn't drink alcohol and doesn't smoke. His speech and social skills need some honing, though. Now in his forties, he is looking for a wife.

In Project Justice, he also shows his personal resolve and determination in having to rescue Kyoko as he and Hayato had teamed up to fight against Kurow.

In the School Life Mode of Nekketsu Seisyun Nikki 2, Hideo shows more of his gentle side towards his students and is always seen smiling after befriending the player's custom character. He is also shown to be quite very strict and no-nonsense as well when his students had failed the test as seen from within his mini-game. He always hangs out with both Kyoko and Hayato during the Beach Overnight and throughout the entire school term. During the School Fair Day, Hideo enjoys scaring unsuspecting people at the horror house, much to Edge's own horror who is shown to be afraid of ghosts.

There was also a weird yet comical side of Hideo that was seen upon sight from within both Swimming Day and the Beach Overnight, in that he had swam in the pool and relaxed at the beach while still having his shoulder pads on.

Hideo is a ninth dan master of karate, as evident in his mastery of the Shimazu style of the martial art. When his father, the director of the dojo, passed away, a huge fight over the estate ensued. The quarrel eventually became full of hatred, and he was stripped of his rights to inheriting whatever his father had left behind.

Hideo is first introduced as a Japanese language teacher who is sent along with Kyoko to recruit students for Justice High School. The game's story has both Hideo and Kyoko being brainwashed by the school's principal, Raizo Imawano into becoming mindless servants for him after both he and Kyoko had started to question Raizo's alarming and disturbing actions during the events of United by Fate. Eventually, Hideo and Kyoko are snapped out of their brainwashing by students from Taiyo High School. Hideo's story has him show concern for Kyoko and in his ending, he proposes to her, to which she personally and emotionally accepts.

Hideo, along with Kyoko and the Taiyo High Physical Education teacher Hayato Nekketsu, investigate who is responsible for the new attacks on the local schools and eventually discovers that a student at Justice High, Kurow Kirishima, is the evil culprit behind the entire situation itself. When Kurow, disguised as Batsu's evil doppelganger Vatsu manages to attack and kidnap Kyoko, Hideo teams up with Hayato in order to save her and defeat Kurow. It is heavily implied that he and Hayato are having a rivalry over Kyoko's romantic affection.

After the incident, Hideo was responsible for carrying the deceased Hyo's body from the burning Justice High Building and because of this, combined with his own past injuries that he had sustained during the battles against both Kurow and Demon Hyo, Hideo is eventually hospitalized alongside with Raizo (the latter being attacked and seriously injured by Kurow earlier on from within the start of Project Justice). In the Justice High ending, Hayato personally allows Hideo to be with Kyoko due to Hideo's own feelings for her, stating that he is "a lucky man". When Kyoko reminds Hideo about both their upcoming wedding and marriage, he personally and romantically blushes in embarrassment while Hayato congratulates them with tears of joy.

Hideo has his own style of karate, known as the Shimazu Style. Despite the name of his fighting style, his moves closely resemble those of Ansatsuken used by "Shoto" characters such as Ryu and Ken.

Hideo and Kyoko appeared as playable characters in the cross-over strategy RPG Namco ✕ Capcom. They first appear to defend the Justice High students from Janga of the Klonoa series.

Hideo appeared as a card in the Heroes and Heralds mode in Ultimate Marvel vs. Capcom 3. 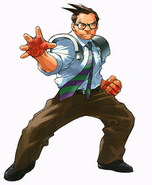 Tiffany vs. Hideo at the Drive In Theatre stage of Rival Schools: United by Fate, with Dan making a cameo appearance on the projector screen in the background.

Hideo in the Namco × Capcom opening alongside Ryu, Jin Kazama, and Bravoman.
Add a photo to this gallery

Retrieved from "https://streetfighter.fandom.com/wiki/Hideo_Shimazu?oldid=215577"
Community content is available under CC-BY-SA unless otherwise noted.