Hokuto (ほくと, Hokuto?), real name Shirase (訃, しらせ, Shirase?), is a video game character from the Street Fighter EX series, first appearing in the original Street Fighter EX. She is a noble practitioner of the ancient martial art kobudō, and sibling to Kairi and Nanase.

Her initial outfit is that of a kyudo practitioner's uniform, being a pair of navy blue hakama and white tabi, with a red lacquered muneate breastplate, over a white hakamashita like gi over a black necklong form fitting undershirt of purple hue. She wears her forelocks up with a headband, that prominently displays her forehead. Her long brown hair is let down.

Her second outfit is a pink komon kimono, with small white pink cherry blossom patterns that run around her long, wide sleeves and the borders of her kimono's opening. Over a gold yellow obi, she wears a pair of verdant green hakama and white tabi. Her brown hair is tied in a high ponytail with a green band in two long and short fringes on each side, showing her forehead.

In Street Fighter EX3, her first outfit has minor changes; the sleeves of her gi became short sleeves, her high-neck undershirt is navy blue and her hakama is dark blue. Her long brown hair is darker and was styled shoulder-length in-game.

In her Shadaloo C.R.I., her appearance is largely the same but her hakama and hair are black and she is equipped with a single brown glove on her right hand.

In Fighting EX Layer, Hokuto's hair is now black (dark brown on her character portrait), has full fringes on her head and pulled down into a low ponytail. She retains her white headband which is connected to her white hairclip.

Her kimono shirt is white, the white short sleeves with red and brown trim have holes in each sides to show her shoulders, her mundate breastplate is blue with yellow flower designs, the flower petals resembles a shape of the crescent moon and her hakama is dark blue with a white trim and has a drawing of a brown mountain at the hem and also white snowflake designs. Her outfit retains the white tabi from her original outfit. She now wears a single black segmented fingerless glove that resembles gauntlets on her right hand with red linings on her wrist and has white knuckle guards and inner part of her fingerless gloves are red. She also has a red segmented wristband on her left one.

Hokuto is shown to be a very calm, noble and mature woman. Despite this, she has quite a temper, shown when Vega started taunting her with his womanizing ways during one of their matches. Because of the sorrow of losing Kairi, Hokuto is not a very open and expressive woman, otherwise she is sensitive of other people's family problems.

During the development of the original Street Fighter EX game, she was named Kobudo Onna (which translates to "kobudo woman" or "kobudo girl"), said name being likely a placeholder.[3]

Hokuto's use of the naginata, combined with her noble and calm demeanor, is likely a reference to the concept of the Yamato Nadeshiko noble woman.

Hokuto was born to the Mizugami (水神) family, which has held a tradition in the art of Kobujutsu. Hokuto was born out of a tryst between a woman of the head Mizugami house and a man from a branch family, additionally inheriting ancestry from the main house of the Bushin clan as a result. Originally known as Shirase (訃, Shirase?) during her childhood, Hokuto was entrusted to the head house at an early age, raised as Kairi's sister by the head of the family in order to conceal the tryst. After her younger sister Nanase was born, the two trained together rigorously in the martial arts and were closely bonded as sisters. Hokuto trained in the martial arts since an early age, refining them into her personal style, eventually blooming her talent to become the "seiden" (正伝) of the ancient hand-to-hand martial arts of the Mizugami.

Inevitably, fate would unfortunately come to divide her family. Being born of the tryst, the branch families of the Mizugami had held deep enmity towards their progenitor clan due to years of mistreatment and abuse. In addition to this strong feeling of hatred and resentment rooted deeply in her genealogy, growing up, Hokuto would unknowingly be influenced to develop an alter ego under her childhood name that would come to end the Mizugami. On the day Hokuto turned 17, she learned of the existence of her older brother from her foster father, who disappeared when Hokuto was still an infant. Her brother was in fact, still alive and walking the path of the Shura (修羅). Hokuto sets off to a journey to stop him, which meant that she would have to face Kairi in a life or death confrontation. Eventually, Hokuto reached the end of her journey, and was reunited with her brother Kairi.

"The cherry blossoms are scattering" She continued the fight for carnage, not knowing the true meaning of her blood-stained lineage. Will she keep fighting long enough to be reunited with her brother and mutually dye their fists red? Or else?

"Wait, and everything will eventually return to where it began." The adopted daughter who was taken in by the Mizugami family. She is fighting in the place of the father who sealed Kairi's memories.

When she was a child, a dreadful power was sealed within Hokuto. But during her battle with Kairi, the seal was unleash, tainting her mind with darkness. After the battle ended, Nanase, who was shedding tears over her sister's transformation, called out to her.
"I was once again being tested by the dreadful power... But Nanase's voice... Her plead for my return awoke me."
Even without losing her mind, there was no one who could have defeated Kairi, except for Hokuto.

Her older brother Kairi lived like a flame illuminating the darkness. Hokuto still had memories of him, even knowing that his heart has been plunged into that darkness... The cruel tragedy of the past was repeated within the assassin's thoughts as well.
Perhaps it was too early, but the two siblings did not wait for Nanase.

"It is my duty to finish you..."
A confrontation between a brother and a sister is like an unthinkable cold glance that will never again smile. Never...

As the image of a man comes into her mind, Hokuto thinks, "Who are you? Brother... is that you?" Suddendly, she falls to the floor as wet tears roll down her cheeks. She knows that there is nothing she can do but wait for the time that she'll be free from the lost memory of her brother...

Hokuto has defeated Kairi just like she did when they fought years ago. And yet Hokuto cannot help thinking that he had intentionally pulled his punches before her hit. And so Hokuto thinks to herself, "Why? Why wolud he do that...?"

Main article: Bloody Hokuto
However, Kairi's presence dispelled the Seal of Blood (血の封印, Chi no Fūin?) implanted into Hokuto, turning her into an assassin whose only purpose was the erasure of Kairi's existence. Unknown to Hokuto, she had been placed under a mental suggestion to locate Kairi and kill him. To prevent this, Hokuto was implanted with the Seal of Blood by the elders of the Mizugami clan, which would be unleashed whenever Hokuto would come into contact with Kairi.

Hokuto appears as a playable downloadable character in Fighting EX Layer, the spiritual sequel to the Street Fighter EX games. Her 'Bloody' form (going by her real name, Shirase) is playable by default.

Now freed from the Mizugami clan's seal, she goes by her real name Shirase. Her final act as "Hokuto" was to seal off her younger sister Nanase's memories of the Mizugami and their conflict so that she could live as an ordinary girl.

Hokuto fights using Mizugami-ryū Kobujutsu. Naginatajutsu is one of the skills taught in kobudo, on which Hokuto's fighting style is based. Hokuto uses the naginata as part of her Meteor Combo, and is seen wielding hand fans as part of one of her Super Combos.

Hokuto's attacks usually advance towards the opponent before striking, and can duck under mid- and high-aiming attacks; one of her challenges in Trial Mode in Street Fighter EX2 Plus is to duck under a Hadoken to hit with a Shinkyaku Geki. She can also cancel these moves to fake out an opponent; her move Shin is a cancel of a lone Shinku Geki or Shinkyaku Geki. Her Kiren Eki can be charged by holding down the punch button used in command input, making it a good move for juggling opponents. Hokuto can also perform short, two-hit combos (i.e. Chugeki Hoh -> Shougekiha/Shinku Geki/Shinkyaku Geki, depending on input) and can counter attacks.

In Fighting EX Layer, Hokuto retains all of her moves from the Street Fighter EX series. Her dual fans during her Super Combo are pink with green flower and wind designs.

Throughout the EX series, Hokuto uses a variety of weapons as her naginata being her primary weapon serving as her Meteor Combo. She is rivaled with Kairi with a total of four Super Combos and two Meteor Combos.

In Street Fighter EX3, she gains a new Super Combo called Kakusei where she is able to transform into Bloody Hokuto as both of her hands glowed while in this state which lasts the entire round. Bloody Hokuto also has gains additional moves during this state.

Her Meteor Combo is the Shirase Gatana where Hokuto wields her naginata to strike down on her opponent dealing heavy damage and her second Meteor Combo is the Renbu which works the same way as Kairi's Kyoja Renbu as both of their moves are similar to Akuma's Shun Goku Satsu.

Hokuto is not a huge combo character without meter. Her gameplay style is more focused around smart counter attacks.

Basic Special Combos: most of her combo enders involve her Chuugeki Hou > Shougeki Ha special attack. Ryuusui is used to start a combo with cr.LK and then Chuugeki Hou or Super.

Basic Super Combos: some of Hokuto's normal attacks and her unique attacks (aside from her overhead) will combo into Super. 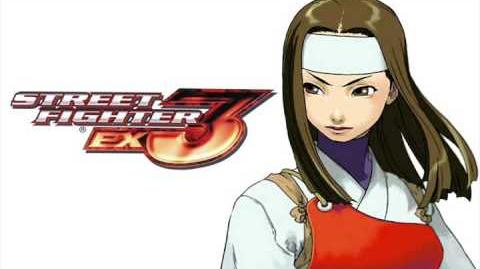 Retrieved from "https://streetfighter.fandom.com/wiki/Hokuto?oldid=220990"
Community content is available under CC-BY-SA unless otherwise noted.