The Inazuma Kick (稲妻かかと割り, Inazuma Kakato Wari, "Lightning Flash Heel Splitter") is one of Ken's Unique Attacks. It was introduced first in Super Street Fighter II Turbo as a followup special move, then in the Street Fighter Alpha series as a standalone command normal. In the EX games, this acts as his Guard Break in the first two games, and as his Surprise Blow in the third.

Note that its English nickname is not to be confused with another popular attack of the same name.

Executed by holding forward and/or backward (depending on the title and installment) and pressing Medium Kick, Ken performs an overhead following-legged axe kick that hits the opponent two times via his heel.

This attack was originally one of the many that can also be performed during any of Ken's unique kick specials in some of the other games starting with Super Street Fighter II Turbo (where it is treated as a special move and can thus inflict chip damage), though the Alpha series is the first to render it as a command normal. Later games allow for both versions of the attack to be performed; Street Fighter III in particular, allows for Ken to perform the attack off of his standing medium kick (which was originally his Kama Barai Geri in many instances where it acts as one of Ken's standing close kick normals).

Unlike Ryu's Collarbone Breaker, it leaves Ken at frame disadvantage on hit, meaning that the player has to be careful not to get counter-hit out of a followup attack.[1]

However, unlike the Collarbone Breaker, it has much more range while also keeping Ken stationary, allowing him to safely poke at his opponent in-and-out if when spaced properly. 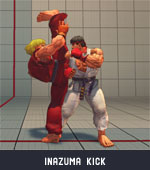 Street Fighter V
Add a photo to this gallery

Retrieved from "https://streetfighter.fandom.com/wiki/Inazuma_Kick?oldid=205864"
Community content is available under CC-BY-SA unless otherwise noted.