Yoko Harmageddon[2] (ハルマゲドン陽子, Harumagedon Yōko?), real name Yoko Harumage (春髷 陽子, Harumage Yōko?), also known as Demon Coach Yoko (鬼コーチ陽子, Oni Kōchi Yōko?), is IJWPW's representantive, a heavyset woman often seen carrying a shinai (bamboo training sword) who used to be a famous wrestler herself. She was forced to retire years ago due to hurting her neck and waist in a match against Black Widow.[1] In Street Fighter Alpha 3, she appears in some of R. Mika's victory animations.

Harmageddon also writes Mika a letter encouraging her to press on towards her wrestling career with confidence, enduring the hardships that continue to come her way just as Yoko did. Yoko reveals that she had a wrestling colleague who talked with the same brusque mannerisms as Mika, and only refers to said colleague by her nickname, "Frisky".

Yoko's first name in kanji roughly means "bright child", and is cosmetically identical to the kanji combo for "proton", read as "yoshi" instead of "youko".

Hangovers[3]
Sunrise Nishisenba (サンライズ西船場, Sanraizu Nishisenba?) is an ace wrestler from IJWPW that Harmageddon had invited to join. She was notoriously clumsy in her debut. As her chokehold is weak, she prefers to use brute force and throwing techniques. Her special move is the Lariat Tequila Sunset (ラリアット・テキーラ・サンセット, Rariatto Tekīra Sansetto?).

Poverty[4]
Maple Storm (メイプル・ストーム, Meipuru Sutōmu?) is an IJWPW rookie. Despite being new to wrestling, she is a former athlete that was part of a women's football team in Canada and participated in the professional league, but the team was disbanded after a scandal with the coach. After watching a Japanese DVD with Harmageddon Yoko, she was impressed with her and decided to join the IJWPW. She is still studying Japanese and became good friends with Nadeshiko. Her special move is a strong tackle named Klondike Gold Rush (クロンダイク・ゴールドラッシュ, Kurondaiku Gōrudo Rasshu?).

Raika (雷華, Raika?, lit. "Thunder Flower") is IJWPW's tag team champion, along with her sister Fuka; they are known as the Furai Shimai (風雷姉妹, Furai Shimai?, "Wind-Thunder Sisters"). She has high stamina and jumping ability due to training at high altitudes.

Not to be confused with Fuka, a character from Street Fighter Alpha: Generations.

Fuka (風華, Fūka?, lit. "Wind Flower") is IJWPW's tag team champion, along with her sister Raika. She trained in Mexico for six months and isn't good at learning other languages. Her special move is Chōjin Fūshagatame (超人風車固め, Chōjin Fūshagatame?).

Crickets[7]
Vivian Nishiki (ビビアン西木, Bibian Nishiki?) is a remarkably conspicuous gimmick-based wrestler who likes strange things. Making full use of foul play and rough fighting, she defended her IJPWP championship three times. Despite her strangeness, she is quite popular. Her special move, 16 Knots (16ノット, 16-Notto?) involves continuously hitting the opponent with a barbwired bat. Her father, SASA Nishiki, plays an active part in the CWA.

Wasabi[8]
Pepe Ishiwata (ペペ石渡, Pepe Ishiwata?) is a masked and painted fighter that keeps her identity secret. She used to live with her Hawaii-born grandmother, but moved to Japan and joined IJWPW. Despite her short size and rudeness, she is a skilled wrestler with great wrestling techniques. Her special move is the drop kick Shock Cone (ショックコーン, Shokku Kōn?). She also has a powerful back throw. 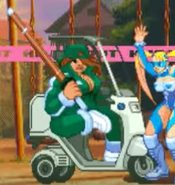 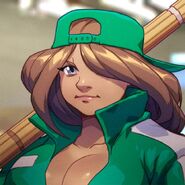 Pepe Ishiwata
Add a photo to this gallery

Retrieved from "https://streetfighter.fandom.com/wiki/Iwashigahama_Japan_Women%27s_Pro-Wrestling?oldid=197321"
Community content is available under CC-BY-SA unless otherwise noted.