Executed by performing two quarter-circle forward motions and pressing all 3 kick buttons, Adon yells while performing a "hunting tiger" stance. He then launches a Rising Jaguar, following up with an aerial Jaguar Kick.

If the Jaguar Kick lands, Adon jumps onto the opponent's shoulders and delivers four fierce hand-chop strikes to their pectoral section, laughing maniacally as he does so. He then knocks the opponent down with a fifth hand-chop strike and finishes off with a brutal stomp to the midsection.

The Jaguar Avalanche can be used as an anti-air, and is also considered the better Ultra Combo for Adon, due to it having more combo advantages.

Adon assaulting the back of Ibuki's head.

Full Sequence.
Add a photo to this gallery 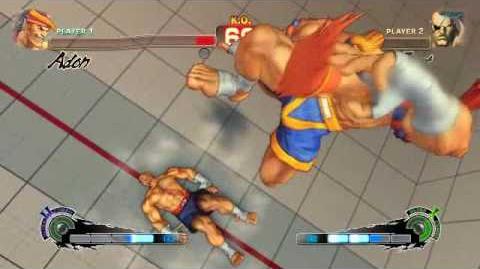 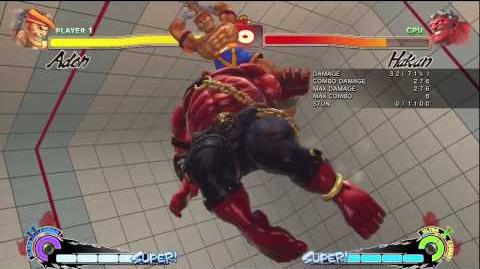 SSFIV HD - Adon - Overhead ~ Rising Jaguar FADC Ultra II
An Adon player uses a Jaguar Crunch to set up an EX Special Rising Jaguar, then Dash Cancels into the Jaguar Avalanche.
Add a photo to this gallery
Retrieved from "https://streetfighter.fandom.com/wiki/Jaguar_Avalanche?oldid=204086"
Community content is available under CC-BY-SA unless otherwise noted.