Donna Yamamoto (Street Fighter animated series)
Jessica Haggar (ジェシカ・ハガー, Jeshika Hagā?) is a non-playable supporting character from both the Final Fight and Slam Masters series who is the young daughter of Mayor Mike Haggar and the ex-girlfriend of Cody. Her kidnapping by the Mad Gear Gang triggers the events of the first Final Fight game. Although not a major character, she has made several subsequent cameo appearances with both her father and her former boyfriend.

Jessica is a young woman with shoulder-length blonde hair and blue eyes. She wears a red sweetheart neckline cocktail mini dress that exposes the shoulders and the back, and a pair of black (previously red) high-heel pump shoes. In her appearance in the Street Fighter cartoon, her dress is purple.

In the Slam Masters series of wrestling games, Jessica, who is 18 years old at the time and is known by her wrestling valet nickname of "Pretty Doll", appears whenever Mike "Macho" Haggar wins a match, walking up to the ring to celebrate with her father.[2] Although the international versions of the Slam Masters games established the series to be set after the events of Final Fight, the Japanese versions (titled Muscle Bomber) actually established the series as a prequel to the events of Final Fight, with Haggar beginning his campaign for Mayor.

In an anecdotal back-story to the game, Haggar once fought Lucky Colt (the character known as Gunloc in the English versions) for trying to hit on Jessica (which happened before she began dating her childhood friend Cody in Final Fight).[3]

In Final Fight, Jessica is kidnapped by the Mad Gear Gang in order to coerce her father Haggar, now the Mayor of Metro City, to relinquish his campaign against crime and corruption. Instead of submitting to the gang's demands, Haggar sets out to vanquish the gang and save her with the help of her boyfriend Cody and his training partner Guy. The three succeed in rescuing Jessica at the game's end.

Jessica made several cameo appearances through many subsequent games after the original Final Fight. In Final Fight 2, she can be seen in a photograph with Cody, Haggar, and Guy at the beginning of the game. The game's opening intro states that she is taking a vacation with Cody during the present events of the story.

In Street Fighter Alpha 2, Jessica can be seen cuddling her boyfriend Cody in the background of Guy's Metro City stage. Whenever Cody decides to shift his attention from Jessica to a female fighter in action, a jealous Jessica will slap Cody in the face to get his attention back.

Final Fight Revenge (which is chronologically set between Final Fight and Street Fighter Alpha 3) would center around Haggar's and Cody's searches for Jessica after her disappearance during a string of riots that occurred in Metro City following the defeat of the Mad Gear Gang. Her whereabouts are never resolved in any of that game's endings. The Street Fighter Zero 3 Secret File Book would later establish that Haggar was able to rescue his daughter from danger, leading to Jessica's departure to Europe from within the events of Street Fighter Alpha 3.

In Street Fighter Alpha 3, Jessica became estranged with Cody after he got involved in too many street fights and was subsequently arrested for aggravated assault. Not much is mentioned about Jessica in the game's back-story, other than she has left Metro City to study abroad in France.[4][1]

Jessica also appears in the Street Fighter animated series from within two of its own episodes. She first appears via a cameo appearance in the episode "The Medium is the Message" from within the audience of the local Street Fighter tournament taking place in India alongside Cody and many other Final Fight characters. She would then later appear in the penultimate second-to-last episode of the series titled "Final Fight", the episode itself taking its name from and being based on the arcade game of the same name and that Jessica would reprise her role in being kidnapped by the Mad Gear Gang, prompting Cody and Guy to join forces with Ryu and Ken in order to rescue and save her.

Jessica and Cody also made another cameo appearance in the Mall Madness stage in Marvel Super Heroes vs. Street Fighter. She also makes another appearance (along with Haggar and Carlos) in Alex's Capcom Fighting Evolution ending.

Jessica's appearance in a Final Fight promotional artwork (she is clearly seen on the right side of the artwork while being behind the members of the Mad Gear Gang). 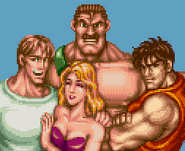 Jessica's cameo appearance alongside her father, Cody, and Guy in Final Fight 2.

Jessica as she appears in Saturday Night Slam Masters.

Jessica's cameo appearance in the background of Guy's stage with her then-boyfriend Cody in Street Fighter Alpha 2 Gold.

Jessica being held captive in the arms of Damnd at the start of Final Fight (original arcade version).

Retrieved from "https://streetfighter.fandom.com/wiki/Jessica?oldid=221145"
Community content is available under CC-BY-SA unless otherwise noted.