For other uses, see Joe (disambiguation).

Joe (ジョー, Joe?) is a non-playable character from the Street Fighter series who first appeared in the original Street Fighter game as one of the ten computer-controlled opponents.

Joe is modelled after Benny Urquidez also known as "The Jet", who was one of the first Westerners to make it big in Japan in the 1970's. Joe's signature move is Benny's Spinning Back Kick. Despite this most western fans believe that he's loosely based on the late kickboxing legend, Joe Lewis.

Joe is a tall, young fellow who has short, spiky, blond hair and wears red pants with white shoes. In his Shadaloo C.R.I. profile artwork, he also wears a light gray tank top with fingerless black gloves and a star-shaped belt buckle.

Joe was formerly the unbeaten kickboxing champion of the United States before violent outbursts and financial troubles caused him to become an outlaw on the road. He currently participates in indie wrestling tournaments under the identity "Super Star".[1]

Joe in the original Street Fighter. 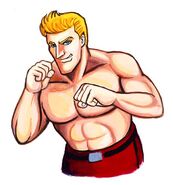 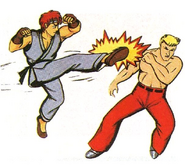 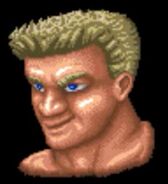 Joe's versus screen icon from the original Street Fighter.

Joe punching the wall in the original Street Fighter intro.

Joe with his back turned in the original Street Fighter intro.

"Ghost" from Final Fight: Streetwise. Speculated to be Joe.

Joe (top right) featured in a variant cover for issue #4 of Street Fighter Unlimited by UDON. 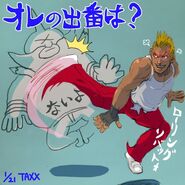 Retrieved from "https://streetfighter.fandom.com/wiki/Joe?oldid=229954"
Community content is available under CC-BY-SA unless otherwise noted.