"You are no match for me! (貴様など俺の相手ではない!, Kisama nado ore no aitede wanai!?)"
—Kairi (Street Fighter EX)

In Street Fighter EX, Kairi appeared as a tall and muscular young man, with long black hair tied in a ponytail. His eyes are black with his left eye being scarred, possibly a relic of his duel to the death against his father. He wore a form fitting, sleeveless blue shirt, dark blue karate pants held by a black obi and wore blue handwraps and blue ankle wraps.

In Street Fighter EX2 and onward, his appearance dramatically changed. His hair is no longer black but has become silvery-white, his eyes went from black to red and they seem to glow during certain special attacks or during some of his win poses. His body became covered in scars as a result of both him succumbing to his demonic powers and his endless string of battles. He wears white karate pants which are red near the top as well as a black belt. He no longer wears his shirt nor his leg warmers, his arms are covered in bandages and they are covered in blue flames whenever his power is at its highest point (gameplay-wise, when he has a full Super bar).

The Street Fighter V website has two different profiles for Kairi, based on his appearances in the first and second games. In his first profile, Kairi's karate pants are dark purple, he wears blue handwraps on both of his hands and his hair is black. In the second profile, he retains the same look he had in later games.

In Fighting EX Layer, his karate pants are dirty white and has black designs on the right side and his black karate belt are now on his red wraps, his silvery-white hair is medium length and tied on a ponytail. Like in his Street Fighter EX2 appearance, his bandaged hands are always covered in blue flames.

One can assume that, due to his memory-loss and his father's last words, Kairi is a serious warrior who is determined to make sense of himself and his life.

In Street Fighter EX2, Kairi became darker and more serious as a result of his new demonic power. Sometimes, Kairi holds his head in his hands and screams in pain (as seen after performing his Kyouja Renbu attack or his win pose), indicating that his new power is taking a huge toll on his mind.

During the development of the original Street Fighter EX game, Kairi's look was largely the same, except that he had both eyes. He was originally named Shujinkou, which means "protagonist" or "main character", though this was likely a placeholder name. [3]

Kairi was born into the main house of the Mizugami family and was trained in the family's ancient art of hand-to-hand combat. However, on a stormy night, Kairi was thrown into the sea from the ship in which he was traveling by Hokuto and lost his memories.[4] Afterward, he eventually made it to the shores of a seaside cliff and passed out. He eventually comes to his senses at the bottom of the cliff with whitened hair covered in scars, but due to his memory loss, he forgets the previous fight with his sister and believes he was thrown him from the cliff [1]. For ten years he has wandered the world, fighting without rhyme or reason. Only the words "you must challenge your limits" remained in his memories. Led by these words, Kairi thought that the only way to recover his memories was to follow the way of the Shura (修羅, Shura?) and fight, replacing his lost memories with the nature of a demon.[5] As he continued fighting, he eventually faced his younger sister yet again, with the meeting returning his memories to him. Despite the attempts of Nanase, the youngest of siblings to stop them, this has been an unavoidable fate for Kairi and Hokuto.

"It seems that you did not train thoroughly" The true meaning of a bloodstained lineage. He follows the path of carnage by himself. What lies at the end? Will he become the master of the fist? Or something else? It won't be long before he begins his destined battle and only then we will know the true answer.

"It seems you did no train harder." A direct descendant of the founder of the original style of jiujutsu, he is man who makes a sport of his bloodstained destiny. What awaits him at the end? Manipulated by the remnant thoughts of an assassin... Will he ever find his relief?

As his battle with Hokuto came to a close, Kairi was liberated from his deep fog by the powers of Nanase, his true younger sister.
He instictively buried the truth about the agressor he defeated. When he was young Hokuto's father attempted to kill him, but failed.
Kairi was born anew, as he discovered someone who needed his protection. Needless to say the tears he shed with hesitation were not tears of grief.

There weren't any sufficiently adequate words to describe who he fought. Was it a new form of himself that did not know of yet? A dark side of himself hidden within him that he did not realize until it materialized? Or some kind of skill that he didn't know he possessed until now?
And yet, he felt a very different spirit and sense during the fight.
"Are you truly yourself...?"
'The answer to this question became an eternal mystery...
[6]

Kairi laughed with both hands dyed in bright red.
Hokuto was torn in mind, body, and sody. Hokuto closed her silent pupils, as she grieved over the lost soul of her brother that will never return again.

Kairi is a changed man. He has tranformed from a once kind human into a dark demon, which will destroy anything in its path. Who or what can save him now? Even Kairi's childhood memories no longer calm him and instead only help to fuel his rage. Maybe... Maybe the only thing left, is the underbreakable blood bond between a brother and his sister...

Losing her consciousness, all Hokuto can remember is Kairi's broad back and now similar to her father's it is. She thinks to herself, "...Dad? Is that you?"

Kairi appears as one of the playable characters in Fighting EX Layer, the spiritual sequel to the Street Fighter EX games.

After losing his memories, Kairi continues to fight while being chased by a powerful and fearsome presence. His powerful energy also causes to break Garuda's seal which it was casted upon by Hayate as the monster was reborn. Kairi who is now in progress to follow the path of the demon.

Kairi's fighting style is labeled as "Mizugami-ryu Kobujutsu". Most of his moves are similar to those of the Ansatsuken-style characters (i.e., Ryu, Ken, Akuma), as detailed below.

Also, in Street Fighter EX2, Kairi has inherited and succumbed to a power similar to the Satsui no Hado. Because of this, he has abilities and power similar to those of Akuma, and moves that resemble his techniques; (e.g. Zanku Hadoken and Raging Demon, Akuma's most lethal technique). An original ability from this power also exists, as having him surge with this power when his super meter is at Lv.3, allows his attacks to negate any projectiles.

In Fighting EX Layer, Kairi retains all of his moves from the Street Fighter EX series and has some minor changes on his special attacks. His hand gestures to unleash his Shinki Hatsudo resembles both Urien's Metallic Sphere and both Gill's Pyrokinesis and Cryokinesis as his projectile turns into a vacuum blast and his Moryu Kasen now resembles Ken's Tatsumaki Sempukyaku that can hit his opponent four times even in mid-air. His Ryujin Kyaku now serves as his anti-air attack to start a combo on his opponent once it was hit.

His first Super Combo is the Garyu Messhu where Kairi does a diving kick to deal multiple damage followed by a knee. His second Super Combo is the Sairo Kyoshu which Kairi punches the opponent and goes for a spinning uppercut if it connects he continues to attack the opponent with one hand while in the air before knocking it down with both of his fists. His third Super Combo is the Shinki Hatsudo Kai which is a powerful version of Shinki Hatsudo but as an aerial projectile to deal multiple damage. His first Meteor Combo is the Shoki Hatsudo which is similar to the Shinku Hadoken while Kairi loses his health slowly before collapsing after usage. This move also serves as his fourth Super Combo as well. His second Meteor Combo is his most dangerous ability the Kyoja Renbu which resembles Akuma's Shun Goku Satsu once after using the move Kairi takes his toll on his mind while sufferring great pain on his head which is also became as his win animation. 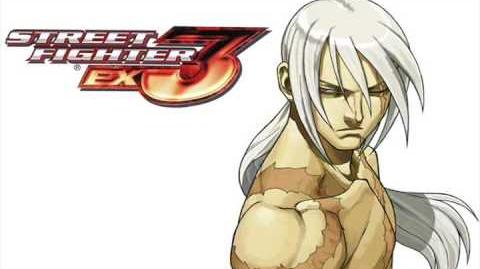