Main article: Kanzuki Family
The Kanzuki Family (神月家, Kanzuki Family?) is a wealthy family whose mottos are "All you need is victory" (also interpreted as "Be the winner in everything") and, alternately, "The worst we'll ever be is the best". Their private Kanzuki Estate covers 200 miles of land, and not only has its own geographical features, but its own climate. The Kanzukis are even wealthier than the Masters Family, so rich that they have their own satellite called "Red Spider-Lily".

Main article: Karin
Karin Kanzuki (神月 かりん, Kanzuki Karin?) is the daughter of Daigenjuro and heir of the Kanzuki family.

Main article: Shibazaki
Shibasaki (柴崎, Shibasaki? also written as Shibazaki) is the butler of the Kanzuki family. He does most of Karin's requests in regards to information gathering, including but not limited to 'dirty work'.

Main article: Ishizaki
Ishizaki (石崎, Ishizaki?) is the steward of the Kanzuki family, and is perhaps the one who has seen Karin grow through the years, being occasionally her confidante in certain aspects.

Main article: Birdie
Birdie is a retainer of Karin, having hired him as proof of her own capability of leadership. Formerly a Shadaloo lackey, he bolted the group after being subjected to much of the organizations unforgiving regimens, and after Balrog attempted to execute him. Promised with consistent amounts of food, Birdie has chosen to stay with the Kanzuki Zaibatsu.

Main article: Ibuki
Ibuki was hired by Karin during Street Fighter V. Having heard of her exploits from Sakura, Karin instantly associated with her after a short test. Ibuki alongside Mika served as Karin's personal bodyguards in the story mode.

Main article: R. Mika
R. Mika is sponsored by Karin ever since Street Fighter Alpha 3, after being impressed by the former's performance and willpower. Mika has also taken part in the Zaibatsu's efforts to fight Shadaloo.

The ninjas are capable of using Katon, Suiton, and Doton. Their fighting power becomes apparent in the Kanzuki-ryu "one hundred man Kumite", which was Birdie's fist task in the Kanzuki Estate.[2]

Bonnie Gordon
Hinagiku (雛菊, Hinagiku?) is a genin kunoichi working for the Kanzuki family. Her main duties are transmitting information and protecting the Kanzuki Estate. She is one of Karin's favorite oniwaban. She has brief appearances in A Shadow Falls, where she first appears before Ryu and Ken, then as one of the ninja fighting Shadaloo.

Hinagiku's appearance in The KANZUKI ZERO Plus by Masahiko Nakahira. 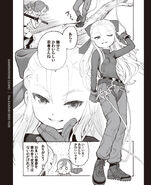 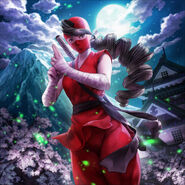 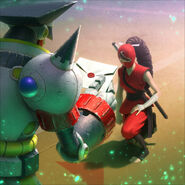 The mystery and ritual of the Kanzuki style[]

Organized by Daigenjuro, this test requires the participant to stop a stampede of fifty wild bulls. Those who achieve this are said to be eligible to inherit the mystery of the Kanzuki family. Daigenjuro attempted this trial several decades ago, but he failed on the 49th. A fourteen year old Karin completed this trial calmly.[3]

Place your hand on your chin and look at the other person with despised eyes. When Karin was fifteen years old she went out of the atmosphere to look down on the earth in order to master the mystery of the Kamigetsu-style social art, "Sagesumi no Me". Her father, Daigenjuro had already mastered this technique. [4]

Since she was born as a woman in the Kanzuki family, it is said that she cannot inherit the family fortune unless she attracts at least 5,000 gentlemen. Karin who has learned "Soul Kiss/Beautiful eyes"(麗しの瞳, Uruwashi no hitomi), is tasked with mastering this technique by Daigenjuro. Karin's mother, Nadeshiko, is said to have fascinated 50,046  gentlemen including her husband.[5]

First shown in her Character Story. According to Shibasaki, it is an art which the Kanzuki family has sought, even at the risk of their own lives. Able to overwhelm an opponent as far as twelve-thousand kilometers away. The move is called "Champion's arms folded" (覇者の腕組み, Hasha no udegumi) or The "Ruler's Staying Hand". Zangief was able to pull it off after seeing it once and describes it as a move where you overwhelm your targets with the rhythmic muscle movements.

A ritual to celebrate the 8th birthday of the child of Kanzuki. The task is to go up against a group of ferocious Great white shark roaming off the Cape of Good Hope in Africa alone. This first appeared in 2019 manga "The KANZUKI ZERO PLUS".

A skill that can be acquired as a result of thoroughly investigating, analyzing, and predicting all actions and attacks of the opponent and practicing to the level of "dodging even if asleep". It’s the ultimate sleeping method to ensure ones safety. First appeared in "The KANZUKI ZERO PLUS".

Red Spider-Lily (まんじゅしゃげ, Manjushage?) is a satellite owned by the Kanzuki family that is equipped with a powerful laser. In Karin's ending from Street Fighter Alpha 3, it is used to destroy's Shadaloo's underground base along with the Psycho Drive and M. Bison. The satellite was destroyed by one of the Black Moons in Street Fighter V.

Concept art of a scrapped appearance in the Kanzuki Estate stage.[6]