The Kazekiri (風斬り, Kazekiri? "Wind Cutter") is one of Ibuki's special attacks, introduced in the Street Fighter III series. It is alternately spelled as Kazegiri in some games such as Super Street Fighter IV.

Kazekiri is one of Ibuki's Juggle combo ender in competition with Raida. It is one of Ibuki's few special attacks that can be teched for a soft knockdown, making it less popular for a Combo ender for grounded combos compared to Neck Breaker and Tsumuji and to a lesser extent Raida as they all allow Ibuki to go for her infamous Vortex knockdown pressure.

The most popular use for this attack is in post Agemen anti air combos, usually after a close hard kick. When used in grounded combos a common tactic is to Focus Attack Dash Cancel the first or second hit (while Ibuki is still considered grounded) and Side Switch the opponent while delivering a Raida. It should be noted that as Ibuki is a multi hit character in both these instances Ibuki will not complete her sequence and not do the full 160 damage (from her hard version or top damage for her other versions) the attack is capable of.

The EX version is Ibuki's invincible reversal. Before Ultra Street Fighter IV it was a rather poor choice as an Anti-Air due to it's hitbox positioning as the aerial hitbox would not come out before Ibuki ran out of invincibility. Some characters such as Hakan and Chun-Li could defeat this clean with some jump in attacks. In Ultra it was given one more Frame of invincibility and a better anti air hitbox. Like the regular version this version of the attack is also a multi hit attack, hitting 5 times. In the Ultra update most characters were changed so if they focus attack dash cancel their invincible reversal and dash forward at the first possible frame they would be at least -5, however Ibuki is one character who avoided this nerf. However Ibuki misses out on a good amount of damage doing this as she does most of the damage of this attack when already in the air.

When Ibuki is at the apex of this attack she can throw a Kunai as a sort of defense. However the player should not depend on this too much for defense as the opponent can simply absorb the kunai hit with a Focus Attack and release when Ibuki hits the floor, something not desired as Ibuki only has 900 HP.

In SFXT this attack's max damage was nerfed from 160 to 150 coming from Street Fighter IV. Like in the previous game this attack tends to be Ibuki's preferred combo ender when juggling. This attack even has one more juggle point than Raida, meaning it can hit in terms Raida (and Yoroitoshi will simply not connect even if the enemy is in range). It should be noted when this attack is used at juggle point 5 it will only hit twice compared to three times. When Switch Canceling off the 5th juggle point Ibuki's partner has little time to combo off the switch. Strangely this 2 hit doesn't turn to three due to the juggling point reset switch canceling provides unlike other attacks in the game. This attack provides 100 more damage than the Cross Rush version of Launcher meaning it might be more desirable to Link into a normal attack that can special cancel into Kazekiri.

This attack provides just enough time for Ibuki's partner to come in off a blocked switched cancel. It should be noted that Kazekiri is very unsafe on block and when this attack is switch canceled Ibuki must be protected by the incoming partner or she could be punished for high damage, something not desired due to her low HP. The light kick version is also a useful anti air against characters that can delay their aerial trajectory such as Lili or Hwoarang, if Ibuki catches her opponent with the last of the three hits while she is jumping to the air with this attack Ibuki will be able to get a full juggle combo.

The EX version of this attack does not provide Ibuki with any invincibility of any sort in this game. Furthermore it does less damage than the hard kick version at 100. This attack instead is a combo too, it doesn't launch the opponent and instead causes a Forced Standing state on the hit opponent, and if Ibuki is close enough (point blank) she can further combo with jumping hard punch for example and continue a grounded combo. It also provides a safe switch cancel on block or a grounded combo opportunity for a partner when switch canceled at hit, however for a safe tag option that cost 2 meter this attack is outclassed by EX Tsumuji as that attack leaves the opponent in blockstun for further time and Ibuki is +4 on block meaning the player doesn't have to protect girly ninja with her partner at all and Ibuki provides a brief period where her partner can set up their pressure compared to the blockstun this attack provides.

A variant of EX Kazekiri is Ibuki's Cross Cancel. When forward hard punch and hard kick are pushed consecutively when Ibuki has just blocked an attack Ibuki will perform her Cross Cancel at the expense of one bar of her Cross Gauge. It starts up in 6 frames (one of the fastest in the game, 1 frame slower than Hwoarang's who is considered the best character in the entire game) and due to it's multi hit nature it can break through some armor based attacks. It's start up and hitting angle allows this to be used for the anti empty jump low Option Select, which is doing this motion when the opponent would hit in a jump, if Ibuki blocked a jump in she will punish with her Cross Cancel, if the opponent does not hit Ibuki in the air she will proceed to do her manual launcher that will beat the low followup the opponent will most likely attempt.

On hit if all attacks in the sequence successfully connect Ibuki is free to Tag her partner in without fear of consequence even in the corner. Ibuki gives her partner just enough time to throw the opponent if they decide to Roll forward to her incoming ally to try and punish. It is one of the better Cross Cancels in the game due to it's startup and multi hit nature, it needs to be switch canceled against at specific timing by the opponent to avoid or else the ally will be caught to. In the event this attack is blocked Ibuki uniquely among the cast has the option to try and defend herself after the attack by throwing a Kunai. Ibuki players should not depend on this too much as enemies who come to expect this can avoid and punish Ibuki further.

Kazekiri has been speed up significantly in terms of startup frames compared to it's previous incarnation. In mid season 3 of the game this attack has been buffed so the final hit does 70 points of damage alone if the previous hits whiffed, effectively helping this attack as an anti air. The light kick version can catch attacks more reliably than Agemen with dominant jump in hitboxes such as from Abigail and delayed aerial arcs such as from Cammy. Furthermore if Ibuki catches a floaty character at the apex of her attack Ibuki can actually combo off the previous hit.

This is one of two non meter combo enders for Ibuki aside from Raida. Unlike Raida this attack is subject to the game's back wake-up mechanic. Raida is also arguably the better juggle combo ender as not all hits of the non EX Kazekiri connect when used in such a time.

The light version starts in 3 frames, the medium in 4 and hard at 5, meaning all versions (although hard is recommended) are Linkable from her buffed standing medium kick which is +5 on hit. The hard kick version has some horizontal push when used while the light version barely has any and the medium is somewhere in between. In grounded combos the hard version is usually preferred due to the more reliable hits. Any version of this attack can be canceled into her Critical Art, however this can be a little hard due to how quickly the attack hits and the fact the player has to do it while Ibuki is still grounded, meaning the player will have to sacrifice some Kazekiri damage as Ibuki will not connect with all of her hits from the attack.

The EX version is Ibuki's invincible reversal of choice. It has below average invincibility frames and will usually lose against other attacks of the same purpose. It's invincibility frames do overlap with Ibuki's 5 frame startup so it will reliably beat non invincible attacks. At the apex of the attack Ibuki can further combo on hit with EX Kunai or aerial Kunai Ikkinage, but if the attack is blocked the opponent can do a full Crush Counter punish, something especially undesirable as Ibuki only has 925 health total which is well below average.

Ibuki after her opponent blocks a Kazekiri in 3D Battle. 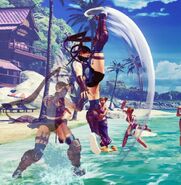 Ibuki comboing off an EX Kazekiri against Lucia.

The OMEGA incarnation is functionally similar but much more floaty. It also has much more screen freeze.
Add a photo to this gallery

Retrieved from "https://streetfighter.fandom.com/wiki/Kazekiri?oldid=238032"
Community content is available under CC-BY-SA unless otherwise noted.