Kei resembles an average Japanese schoolgirl. Her hair is long and usually light brown, even though it sometimes appears as black. She has a pink or white headband and is usually seen wearing a school uniform. (Though unlike Sakura's, Kei's has a more "traditional" design.) Underneath her skirt, she wears a pair of white panties, which are briefly visible in her Marvel Super Heroes vs. Street Fighter sprites. She wears brown shoes and white socks and is usually seen carrying a brown briefcase.

While Kei is the typical average schoolgirl who is into boys and clothes, she also reluctantly accompanies Sakura on her quest to become the greatest street fighter. Her grades in school are mostly average, but she possesses a phenomenal memory, never forgeting the face and name of a person she has met. As a hobby, she likes to collect merchandise related to octopus-like aliens.[1]

In the UDON comics, Kei is portrayed as a bit sarcastic and ironic, and though she often ends up in trouble due to Sakura's misbehaviors, she supports her nonetheless.

In Marvel Super Heroes vs. Street Fighter, Kei accompanies Sakura before her battles, and sometimes joins her when she wins. She also appears in Dark Sakura's ending in the Japanese version, where she runs after Akuma and Sakura, then trips and falls over.

In Marvel vs. Capcom: Clash of Super Heroes, Kei and Sakura make a cameo in the background of the public sentō baths stage, sitting in one of bathtubs. Sakura cheers on the fighters in middle of their match, embarrassing Kei.

In Marvel vs. Capcom 2: New Age of Heroes, she appears in some of Sakura's win poses, much like in MSHvSF.

Though Kei does not appear in any of the games, she is seen in promotional artwork alongside Sakura.

She makes an appearance in a flashback where she asks Sakura what she wants to do after graduating high school. She's last seen in a photo with her boyfriend. 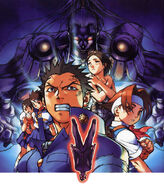 Kei in artwork for the Rival Schools series 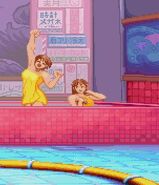 Sakura and Kei's cameo in the MvC bath house level 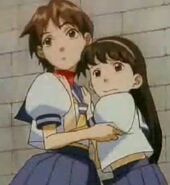 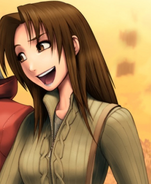 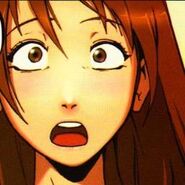 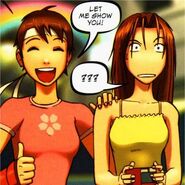