In the game's story, Kevin is a cyborg cop in the year 2010 AD in service of the Galaxy Police (Heavy Crimes division), codenamed Valentine Type MX-5 (MX-5 for short). Armed with an energy bullet, his mission is to eradicate out-of-control parasites and their mutated hosts, gather their power to open a portal, and proceed through to the next world.

Feeling pain every time he gets hurt (something he shouldn't feel as a cyborg) and that "something is crawling around inside of him", he finds out ultimately that he is one of the parasites himself. Dr. Jose, who was one of the researchers behind the parasites, had created Kevin in order to use him as a weapon to control the universe, leading him along this path to gain more and more power. Refusing to be used in such a manner, he fights against the doctor, and then is left to ponder his fate.

At the end of the game, he receives a message from headquarters, giving him a new mission to arrest or eliminate a terrorist cyborg. Debating the matter in his mind for a moment, he chooses to continue fighting, and returns to Earth.

In the American localization, Kevin is referred to as Ken. After winning the Street Fighter tournament, Ken went to the Bargham University and became a scientist. Along with his partner Troy, Ken developed "Cyboplasm". One day, Troy was killed and the Cyboplasm stolen. Although it was 25 years since Ken was in a battle, he used bionics to improve his abilities and search the killer to avenge the death of his best friend and recover the Cyboplasm. During his quest, he fells great pain for unknown reasons. He later discovers that Troy faked his death and had used Cyboplasm on Ken, but erased his memory of the event. Troy asks his friend to join him in his plan to conquer the world with Cyboplasm, but he refuses and they fight. In the end he is asked to return to Earth to deal with the Cyboplasm, which has become epidemic.

Kevin attacks by releasing energy bullets named Sonic Bullet (ソニックブリット) from his punches (forward or up) and kicks (diagonally up). Those energy bullets can be powered up with capsules found in stages, increasing their range and power. When powered up, holding forward while attacking will make the bullets move in an arc and have homing properties. Kevin can perform a backwards Flip Jump that leaves him immune to damage while being performed and allows him to shot straight down. He can also climb walls.

Besides power ups of his shots, in some stages Kevin can obtain a Flip Shield (フリップシールド) that forms a barrier on his feet during a backflip that can damage enemies, and a Back Option (バックオプション) that creates a white sphere behind him to protect him by damaging enemies.

Kevin Straker, as he appears in Street Fighter 2010. 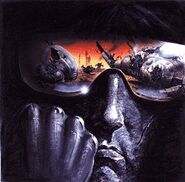 Ken dressed as Straker (middle-front) in a variant cover for issue #11 of Street Fighter Unlimited by UDON.

Kevin Straker on box art of Street Fighter 2010.
Add a photo to this gallery

Retrieved from "https://streetfighter.fandom.com/wiki/Kevin_Straker?oldid=219473"
Community content is available under CC-BY-SA unless otherwise noted.