Venice Beach, California, United States of America (US version only)

King Rasta Mon lived peacefully in the mountains of the Dominican Republic, until he was discovered and his athletic ability was evaluated. He then trained under martial arts master Matthew Ainsworth. Soon afterwards, he debuted as a wrestler.

Rasta is usually tranquil, but when he enters the ring, his instincts take over and he goes wild. Since he knows very little human language, he studies it by watching cartoons. Rasta has an unusually intelligent simian companion named Freak who arranges his matches.

Rasta's design and fighting style are both reminiscent of the late indie wrestler Bruiser Brody. It is believed that King Rasta Mon's design was one of the early character models for Street Fighter character Blanka. King Rasta Mon also bear some similarities (in terms of his background and personality) to that of the late WWE wrestler George "The Animal" Steele. Unlike Rasta Mon, who can speak some English, Steele was only ever known to have spoken a few words during this gimmick, despite being very good on the mic, most notably "Duh-da-dahh." or "YOU! YOU go!", with the former quote said to have being invented by accident.

Freak is Rasta's monkey companion. The two grew up together in the jungles of Santo Domingo, and it is said that they have a brotherly bond. With an IQ exceeding 200, the simian has a much better grasp of human speech than his human cohort and other contemporaries. Freak's role appears to be that of both an assistant and a manager, seeing as how he helps organize (and occasionally partakes in) Rasta's matches. It has been said that Rasta is one of the few wrestlers to have beaten Victor Ortega, due to Freak's interference in the match.

The fact that Freak is a wrestling monkey may have been a reference to the late WWE wrestler turned commentator Gorilla Monsoon (who is clearly above all, a human), but his role as a deceiving manager may also be a reference to Monsoon's commentator friend and on-screen rival, and self proclaimed "broadcast journalist", the late Bobby "The Brain" Heenan, who was also a manager. Most notably, Heenan was also nicknamed "The Weasel" due to his sneaky, interfering, biased (as a commentator) heel persona, as well as also having a notable on-screen rivalry with his friend Hulk Hogan, Superstar Billy Graham's protégé (in turn, Ortega himself was based on and inspired by both Hogan and Graham). 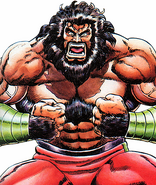 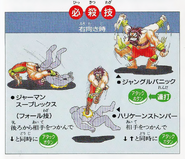