Yurika, the Imawano clan, people who give him orders

Much like Urien from the Street Fighter III sub-series, Kurow is shown to be a very malicious yet mentally unstable person with evil ambitions. Like Hyo Imawano, he is also a master manipulator as well who had sought to reform and take over both Japan and the entire world by force while also doubling as a devious conspirator when he had enlisted both his loyal admirer, Momo Karuizawa and his older sister Yurika into working with him. He can be calm and indifferent at times when he feigns innocence to the teachers, as well as acting more like a villain when he made everyone into slaves by brainwashing them.

Aside from this and much like Hyo himself, Kurow also has a very negative side when it comes to the concepts of both love and friendship and that he considers such ideals as being "absolute nonsense and worthless trash"; this is made quite very notable and infamous when he had unexpectedly betrayed Momo near the end of the Gorin High storyline and declaring Yurika a traitor to the mission after she had turned against him and sided with her friends Akira and Zaki near the end of the Seijyun High storyline.

When he had disguised himself as Vatsu (Batsu's evil doppelganger), his personality is the same as the real Batsu's, only with an evil twist as he is shown to target and attack women for no good reason and also fighting against the teachers for his sadistic satisfaction while also aiming and hoping to tarnish and destroy Batsu's own reputation from within the process of his malevolent actions.

His primary appearance is an altered version of the Justice High school uniform. He wears a black short jacket with red outlines, brown mesh short sleeves which is connected to the sleeves of his jacket, black pants and matching black shoes with a single red lining. He wears red fingerless gloves similar to Batsu's and has sharp claws on both of his hands which he can elongate when some of his moves are used.

As Vatsu, he appears identical to Batsu's appearance and his outfit but has platinum blonde hair streaks in each sides of his hair as well as the sharp claws.

In the Justice High story, he wears at one point the standard male Justice High school uniform (only colored blue instead of red) and his hair is dyed dark blue to conceal his identity infront of the school's teachers.

Serving as the main antagonist of Project Justice, he makes various appearances throughout different stories early on in the game's Story Mode, either as himself or as "Vatsu", an evil doppelganger of the main protagonist Batsu. His main actions include attacking various groups of students while also sowing the seeds of tension and distrust among the local schools themselves, being aided and assisted by his obedient subordinates, which consists of his older sister Yurika, his loyal admirer Momo, and a brainwashed Daigo. Kurow was sent by the "Reverse Society" (in which the Imawano family was a part of) to assassinate Batsu, Raizo, Kyosuke and Hyo after Hyo himself had failed in his mission from within last year. To make matters worse, not only does he manage to seriously attack and injure Raizo to the point that Raizo himself is sent straight to the hospital (with Kurow personally deciding to hold back in killing Raizo via his own reprieve in that Raizo would still be of use to him from within the near future) while later on brainwashing both Daigo and Hyo using his flute and disguising himself as Batsu's evil doppelganger Vatsu as a part of his evil plan, but he also has a different agenda from that of the organization who "had been using him all along", which is to reform and take over Japan and the entire world by force. In short, he's an assassin gone mad.

At a certain point, Kurow unveils himself as the true mastermind behind the recent upheaval among the local schools. After being defeated by the group of students selected by the player, he attempts to send a supposedly brainwashed Hyo after the group of students, only for Hyo to reveal that Kurow's brainwashing attempt towards him early on in the game didn't truly affect him upon sight and that he had only pretended to be brainwashed just so he could get closer to Kurow and learn all that he needed to know about his evil plan, effectively insulting Kurow. The two engage in a swift and quick battle, leading to Kurow suffering a bloody defeat from Hyo, who soon transforms into his evil alter-ego Demon Hyo and that the battle against Demon Hyo himself would soon lead to Hyo's own death in due time.

The initial sequence following the final battle in Story Mode reveals that Kurow was hospitalized after his bloody defeat, but he doesn't stay for too long as he unexpectedly escapes after a few days. His whereabouts after escaping the hospital remain unknown to this day.

Kurow's fighting style involves using his sharp claws which are similar to Raizo's but unlike him, Kurow can elongate his claws. Kurow utilizes claw attacks and can stab his opponent with one hand. He can also engulf in a black orb to make vacuum claws on his opponent and he can utilize a projectile can make one or two dark tornado storm as part of his burning vigor attacks.

As Batsu's fake version, Vatsu, he basically combines his own fighting techniques with some of Batsu's.

Both as Himself and "Vatsu" 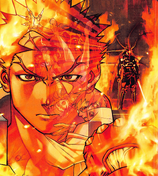 Project Justice official artwork.
Add a photo to this gallery

Retrieved from "https://streetfighter.fandom.com/wiki/Kurow_Kirishima?oldid=189766"
Community content is available under CC-BY-SA unless otherwise noted.