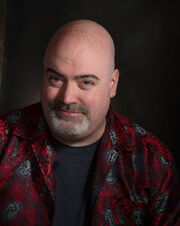 Among many others, Kyle Hebert is also known for voicing the adult Gohan in the Dragon Ball series and Kazuya Mishima in the CGI animated Tekken movie, Tekken: Blood Vengeance.

Retrieved from "https://streetfighter.fandom.com/wiki/Kyle_Hebert?oldid=209344"
Community content is available under CC-BY-SA unless otherwise noted.