Las Vegas, 11 pm, a place to pursue the American dream, with Balrog making a lot of money with boxing and using it for drinks, gambling, and women. This night its streets will be Balrog's ring as he is challenged by a street fighter, Balrog taunting the challenger by saying that his fists will be dirty with blood.[1]

The fight takes place in front of a casino with a neon sign that says "Golden Nugget: Nin-Nin Hall". Other neon signs can be seen nearby, such as "Wedding Chapel" and "Golden Goose". Many people are watching the fight in front of the building, and two women constantly walk back and forth. There are also two Rolls Royce vehicles stopped in the area. The floor of the arena contains the text "Las Vegas!".

In the console version of Street Fighter Alpha 3, Balrog's stage is set in Las Vegas, this time over a crowded Fremont Street, specifically over the Glitter Gulch area of Fremont Street Experience. The flooring from the old SF2 stage reading "Las Vegas!" is still present in the arena space, while the area will present signs resembling iconic characters Vegas Vic and Sassy Sally. The dancers from the SF2 version will appear as well.

The High Roller Casino is a DLC stage released in 2016. It is a reimagining of the Las Vegas stage from the Street Fighter II games. However, the changes made to the stage is the neon sign in the background that used to say "Golden Nugget: Nin-Nin Hall" was changed to "Golden Bullion: Shadaloo Hall". Some of the other neon signs from the original version are absent.

The stage is set in front of a casino owned by Shadaloo. Don Sauvage and Max can be seen in the background. 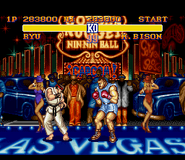 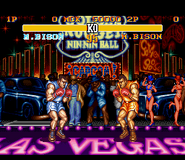 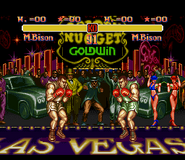 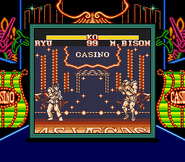 Retrieved from "https://streetfighter.fandom.com/wiki/Las_Vegas?oldid=218617"
Community content is available under CC-BY-SA unless otherwise noted.