Laura Matsuda (ララ・マツダ, Rara Matsuda?) is a character appearing in the upcoming Street Fighter V.[3] She was first seen in the Japanese game magazine Famitsu and through a leak on Twitter. Laura is the third of the four new fighters confirmed for Street Fighter V, the first new female fighter in the game and the third Brazilian fighter to appear in the main game series following Blanka and her younger brother Sean.

Laura has long black hair, the right side being worn loose and the left side starting as cornrow braids before blending with the rest at the back. She has light brown eyes.

Described as "bohemian", Laura has a free spirited and energetic personality and enjoys thrills.[4] Similar to Makoto, she has a desire to promote her family's fighting style.

Laura is the older sister of Sean Matsuda. The two of them were trained by their grandfather in the art of the family's Matsuda Jiu-Jitsu. When Sean leaves to become Ken Masters' apprentice, Laura becomes the heir of the art.

Heir to the Matsuda Jiu-Jitsu style, Laura looks for opponents to fight and to promote her fighting style.

Her fighting style is a original martial art inspired by Brazilian Jiu-Jitsu known as "Matsuda Jiu-Jitsu"[4]. Laura uses the art in it's purest form (unlike Sean who mixes the art with his original shoto style). Laura has been seen to use grappling techniques and breaking throws. Some of her kicking moves are similar to Elena's Rhino Horn and she is able to manipulate electricity similar to Blanka. Her Thunder Clap projectile works in a similar fashion to Juri's Fuhajin and some of her special attacks include grabbing her opponent and break their leg while another involves slamming the opponent to the ground and breaking their arm.

Her Critical Art has her grabbing the opponent in a tornado fashion in mid air and slams them to the ground, forming a lightning strike as she spins her opponent in a electric dodge ball (similar to Blanka's first Ultra Combo in the Street Fighter IV games) to finish her opponent with a headlock. 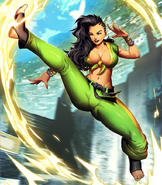 Art by GENZOMAN.
Add a photo to this gallery
Retrieved from "https://streetfighter.fandom.com/wiki/Laura?oldid=114261"
Community content is available under CC-BY-SA unless otherwise noted.