Makoto (まこと, Makoto?) is a video game character from the Street Fighter series, first appearing in Street Fighter III: 3rd Strike. She is a tomboyish Japanese teenager looking to bring back the glory to her late father's dojo.

During the development of Street Fighter III, the team were asked to make a character based on ikken hissatsu: simple, direct, and powerful. At the time, Ryu and Ken became too supernatural while resembling American style of karate, so the team wanted Makoto to represent Japan’s style of karate. [5] Makoto’s design was finished during 2nd Impact's development, but for various reasons, the team ran out of time and were unable to include her.[5]

Her normal attacks originate from Karate Master (Karate Baka Ichidai), the move Fukiage is based on the move Yoshiji Soeno used to intercept a falling coconut after Masutatsu Ōyama demonstrates the true karate chop against a coconut tree.[6] Makoto likely draws inspiration from the young karate champion Kenka Fudō (拳華) from Lucha Doll Mai (ルチャDOLL舞), a manga Akiman is already aware of.[6][7] When combining the white dogi, hachimaki, black hair, Japan, the characteristics made her imagined to be Ryu’s little sister.[8] However her real brother can be seen in her ending. Makoto quickly became the most popular character during location tests in both Japan and America.[9]

Makoto sports a karate gi with minor patches. Underneath, she wears a red sports bra. Around her neck is a long, yellow hachimaki (headband) that hangs down behind her back. Her hair is short and somewhat messy, and she walks barefoot. Her body is very well-built for her age and size.

Makoto is tomboyish, brash and very competitive, always looking forward to new challenges; she often accuses her opponents of sandbagging if the fight feels too easy. Although having little fashion sense for a girl her age, she still hates when she is mistaken for a boy.

Makoto loves the heat of battles, and fights to revive the honor of her father's dojo. She fears no one, and will challenge any opponent. While she is still young and inexperienced, many fighters are impressed by her skill and power, and urge her to continue her training.

According to Makoto's win quote against El Fuerte in Super Street Fighter IV, her favorite foods are sushi and sashimi.

Makoto seeks to defeat Fei Long in order to increase her dojo's reputation.

Despite their limited interaction in the games, Ibuki and Makoto both are portrayed as friends and occasional rivals in the side media.

Elena thinks of Makoto as a friend due to their shared interest in fighting, while Makoto just thinks she is weird and can't be taken seriously.

Similarly to Ibuki, most of Makoto's interaction with Elena comes from the side media.

Like with Fei Long, she seeks Ryu out and challenges him to enhance her dojo's reputation.[10]

Makoto is a young Japanese tomboy, raised in the rural Tosa region of Japan[11] and trained in Rindo-kan karate. Since her father's death, Makoto's dojo has been floundering, and her older brother decided to become a businessman, leaving Makoto to elevate her dojo back to its former glory.

Makoto is horrified to discover the decrepit state the dojo is in and enters S.I.N.'s tournament in order to win money to renovate it. During the tournament, she encounters and fights Fei Long in the hopes that the publicity will enhance Rindo-kan's reputation.

In her ending, she says that she "beats the pants off" of all her opponents - however, she didn't win any money since the tournament sponsor, Seth was killed and S.I.N. disbanded. She decides to rebuild her father's dojo by hand, and make money the old-fashioned way. [12]

Makoto develops something of a rivalry with kunoichi Ibuki, as shown by their alternate opening when they fight each other. She also finds Ryu and challenges him to enhance her dojo's reputation. After her fight with Ryu, the publicity attracts a swarm of potential students to her dojo.

Makoto's ending shows her standing in front of a pile of defeated fighters; among them are Cammy, Alex, Zangief, Ryu, T. Hawk, and Dee Jay. The news on Makoto quickly spreads around, many fighters assemble at the Rindo-kan Dojo where Makoto beats them one by one, such as Kenichi Kakutani and Somsak. Her older brother informs everyone that only thirty challengers will be accepted. Makoto's brother and grandfather are happy to see how popular the family dojo is, and her brother tells their grandfather to take care of Makoto while he goes on a trip. In the meantime, Makoto is getting ready to face more fighters.

In UDON's third Street Fighter Legends comic, Makoto's surname is given as Kato, and she transfers to a high-school near the dojo at the beginning of her senior year. She is in the same class as Ibuki and Sarai, and when her teacher introduces her she declares that she is the master of the Rindo-kan dojo, to the laughter of the class. She then declares her intention to defeat every fighting style in order to demonstrate the superiority of Rindo-kan.

It isn't long before she gets into a fight, and when she knocks her antagonist out, Ibuki sees a large classmate about to attack her from behind. Ibuki intervenes by throwing a kunai handle-first at him, which knocks him out as well. The only one who notices Ibuki's intervention is Makoto, who chases after her and, sensing that Ibuki is a strong martial artist, challenges her to a fight after school. However, after school a Geki clan ninja ambushes Ibuki, preventing the fight.

Makoto issues written challenges to "a few thousand" dojos, however Dan Hibiki is the only one to come to her dojo and answer the challenge. Makoto thrashes Dan soundly and sends him through the roof of the dojo with a Seichusen Godanzuki, and crosses him off the list. Ibuki then appears and Makoto reissues her challenge, insulted that Ibuki ditched their battle. Ibuki tells her that she cannot fight her as she wants to keep a low profile and not draw attention to herself, and promises to fight her later. Makoto is satisfied with this, and exactly 21 minutes later Ibuki marvels to herself about how friendly Makoto has immediately become.

Elena then transfers to their school, announcing a desire to make friends with warriors. A classmate informs her that Makoto is a "warrior woman", and Elena immediately hugs her, much to Makoto's irritation.

Elena's attempts to befriend Makoto and Ibuki are rebuffed at first as Makoto declares that Elena is "in a lower grade than us, and we don't LIKE you". However, Ibuki is more accepting and eventually the three are inseparable (much to Sarai's jealousy).

Eventually, Ibuki's teachers give her her final ninja exam: she must challenge Oro, who has embarked on one of his occasional journeys from Brazil and is in the shrine on Mt. Atago. Makoto and Elena help Ibuki train and Makoto reveals that her father once brought a handful of his best pupils to challenge Oro, and that they were no match for the ancient master, even when he invited them to all attack him at once.

When Ibuki goes to fight Oro, Makoto tags along (as well as Elena and Sarai). After a brief sparring session, Oro tells her that they are done as he doesn't want to hurt her, but acknowledges her strength, admitting that he thought about using both hands. Makoto then steps forward and challenges Oro in order to reclaim her father's honor after the humiliation years ago, but Oro refuses, saying that she is not ready and that her anger would prevent her from fighting effectively, but says "perhaps another time". Makoto tearfully accepts this, thanks him and walks away.

On their way back they run into another Geki ambush, and are caught in a net. However, Makoto has no patience for this, turns bright red with anger and begins assaulting the Geki from within the net, dragging the others with her. Eventually they are freed from the net and defeat the Geki, then rush off to 'The Glade of Ninjas' which they can see burning in the distance. There, they defeat the rest of the Geki.

After graduation from high school, Ibuki goes to university and Makoto focuses on her dojo full-time. Ibuki tells her that she's ready for their fight now.

Makoto is a student of Rindo-kan; as such, her style is boisterous and aggressive (much like Makoto herself), characterized by powerful punches and kicks, as well as formidable karate techniques such as chops and throws. But as many have noted, despite her strength in Rindo-kan her style is considered basic, amateur and textbook that needs its own tweaks to be truly effective.

Makoto's overall styles revolves around sudden strikes with precision, often anticipating an opening to deal heavy damage to the opponent. Makoto's slow ground speed is her greatest strength, since she can catch the opponent off guard with attacks which are extremely fast, and can start dealing cross up attacks. However, she is prone to being thrown since her attacks usually place her in throwing range right in front of the opponent if jumped over, blocked, dodged, or parried. Despite this, Makoto's combo ability is extremely huge, but requires precise timing to get some of her combos right. She has particularly powerful and brutal attacks, such as choking her opponent to momentarily stun them.

Adding to her power is her Super Combo/Art Tanden Renki. Like Yun's Genei Jin and Yang's Seiei Enbu, it temporarily changes the properties of some of her attacks. However, in her case Makoto's entire moveset gets a 25% power boost, making them hit even harder than they did before. This also affects her Ultra Combos. 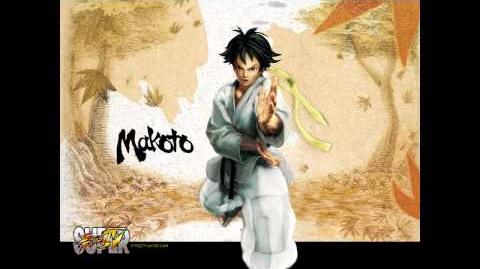