Momotaru (モモタル, Momotaru?) is a character from the Street Fighter series, appearing in a profile on the Shadaloo Combat Research Institute character guide.[1] He is based on the main character of Capcom's Pirate Ship Higemaru.

Momotaru is the older brother of Beard, Bows and Ruby. He is a big man who shoulders a huge barrel which he uses to throw at his opponents. Despite his rugged appearance, he has a very friendly personality. The ship that he travels on with his Norwegian fisher siblings is named the Anchor (アンカー号, Anchor?). He has also fought against Ryu at some point in the past.[1]

Momotaru was considered as a playable character for Street Fighter V. He would have used his barrel as his main source of attack. Birdie however was chosen over him instead.[2] 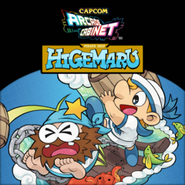 Retrieved from "https://streetfighter.fandom.com/wiki/Momotaru?oldid=222285"
Community content is available under CC-BY-SA unless otherwise noted.