Megumi Ogata
Nanase (七瀬, Nanase?) is a video game character from the Street Fighter EX series, first appearing in Street Fighter EX2 as a hidden fighter. She is the current successor to the Mizugami clan, and younger sister to Kairi and Hokuto.

Nanase appears in the game Fighting EX Layer, a spiritual successor to the Street Fighter EX games, under the name Sanane (紗波音, Sanane?).

Nanase appears as a brown-haired teenage girl of average height, with her hair tied back in a ponytail. The top half of her outfit resembles a sleeveless floral-print yukata, with a purple shirt worn underneath it, as well as a breastplate on top and was tucked into a large orange belt with a yellow trim. The bottom half of her outfit is a blue skirt resembling that of a traditional Japanese schoolgirl's uniform, along with matching colored socks and green sneakers. She wears greenish-blue gloves, matching her breastplate in color. Underneath her skirt, she wore bloomers similar to Sakura's but the color is light purple.

In Street Fighter EX2, Nanase's primary outfit has a minor color change in-game; her shirt is pale purple, the half of her sleeveless floral-print yukata is capri blue, her belt is red with an orange trim and both her gloves, socks and sneakers are dark blue.

In Street Fighter EX3 her gloves are blue to match her floral-print yukata and her sneakers appear as indigo. Her skirt is also extended below her knee.

Her outfit remains mostly the same in her Shadaloo C.R.I. profile art, save for her gloves and breastplate being brighter in coloration, and her sneakers being colored white.

In Fighting EX Layer, Nanase's hair is longer and its color is black (brown in her portrait). While assuming her name as Sanane, Nanase now wears a casual outfit; a pink and white high-neck dress with frills at the edge, a dark blue undershirt with an extended collar, and black stockings with gray cross strap designs. Both her sneakers and her gloves from her original outfit are now turquoise. She also wears a large lime green scarf on her neck with a rabbit pin at the left side. She also has a cross hairclip at the left side of her hair and black, gray and dark green headphone on her neck. During her win pose, Nanase carries a wooden bo staff instead of the red and black naginata she previously wielded.

Nanase is generally very cheerful, and has a bright and lively personality.[1]

Nanase was born to the main house of the Mizugami (水神, Mizugami?) family, growing up with her beloved elder sister and role model Hokuto. Although born to a family of kobujutsu masters, Nanase only trained to maintain the tradition and actually dislikes her training, slipping out whenever she gets the chance. However, Nanase avoids cutting training as much as possible in order to not upset her sister. In spite of her reluctance to train, Nanase is a skilled master of bojutsu.

One day, Nanase was surprised by Hokuto's sudden decision to forsake the title of Seiden (正伝, Seiden?) of the Mizugami Ancient Art of Jujutsu and handed it down to her. Not long afterward, Hokuto disappeared and set off on a journey to fight a new enemy. Nanase later learned that Hokuto was in fact, searching for their long-lost elder brother Kairi, and went on a trip to prevent the two from fighting each other.

Nanase was raised to be the successor of the Mizukami family. But when she heard about her brother Kairi from her grandfather, her heart was moved and Nanase got the urge to set off to a journey for the truth.
But was she motivated by her yearning to see her brother? Or was it a journey to become a successor in the Mizukami family? Not even Nanase herself knew for sure.
"Wait for me... Brother... Sister..."

"Sister, Brother, stop fighting!" echoed Nanase's sorrowful shout. At the very moment Kairi opened his eyes. Thanks to Nanase, Kairi was liberated from the insides of a deep fog when the appearance of his young sister overlapped within the darkness of his memories. Nanase's sister felt in her mind that her own brother Kairi has been rescued from a solitary darkness.

"Brother, Sister, please stop it!"
Kairi softened his fists the moment he heard Nanase's scream.
Despite their separation, they were still brother and sister.

After her victory, Nanase reflects upon how her lost brother has changed her life Forever. Since her sister left to find him and never returned, Nanase was forced to learn and become a master of her family's Mizukami style. She never wanted to become the master of this style and keeps wishing that one day things will go back to the way they were...

Hokuto was very pleased that Nanase has grown to be much stronger that she had espected. Hokuto complimented her sister, "You've become so strong." Nanase smiles shyly and says, "Yes." Through their battles, they learned to have a mutual trust which became stronger than that of their sisterhood. Although Kairi changed their lives for the worse, he also changed thier lives for the better...

It was Nanase's wish that put and end to the fightthat lasted a decade. She happily spoke, "Let's go home together." But Kairi started to walk away, ignoring her words. Hokuto stood in his way and commanded, "It's my duty to prevent you from from going into the evil way again." Kairi replied, "Do as you wish!" And from there, nobodyknows where they went...

Street Fighter EX3 (in team with Kairi and Hokuto)[]

Nanase yells, "Grrrrrrr! Kairi!" At the moment, Kairi saw the image of his little sister in Nanase and spoke, "Nanase... is that you?" Suddenly, all of Kairi's lost memories came back. With tears in his eyes, he turned to his sister and says, "We can be together from now..."

Nanase was mentioned in Hokuto's profile, after being freed from the Mizugami clan, Hokuto wanted her younger sister to live a normal life.

After being freed from the Mizugami clan as her older sister wanted, Nanase finally assumes her name as "Sanane", a girl who is exceptionally skilled in naginata and occasionally overcomes her deja vu when using her weapon. After crossing paths and being defeated by a certain man at the Sports Festival, Nanase begins to question about the truth behind her early life (unaware that her sister Hokuto uses the last of her powers to erase her memories).

Nanase's fighting style is based in Bojutsu. Her growing bo-staff is usually used as part of her every special attack. Nanase also shares some attacks with Hokuto, particularly her throws. She is versatile in that she can attack from different ranges using her staff.

She is also expert in hand to hand combat when she uses both punches and kicks.

In Fighting EX Layer, she retains most of her moves from Street Fighter EX series. Her growing bo staff resembles a long naginata when she unleashes her special attacks and her Super Combos.

Nanase has effective attacks at all ranges due to her growing staff.

Basic Special Combos. Most of her combos are based around her Sanren Kon special attack. 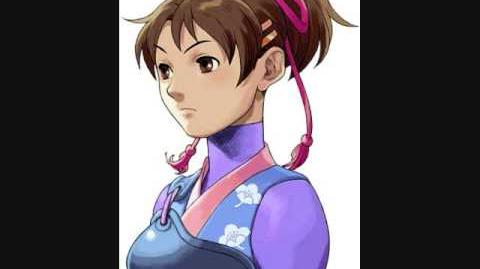