The Nightmare Booster (ナイトメアブースター, Naitomea Buusutaa?) is M. Bison's first Ultra Combo in Street Fighter IV. As its name implies, it is a more powerful version of the Knee Press Nightmare.

Executed by charging backward then moving forward, backward, forward and pressing all 3 kick buttons, Bison makes his traditional "You're done!" throat-slicing gesture, and then proceeds perform two Double Knee Presses while shouting the Ultra Combo's name. He follows with a Psycho Crusher that, if it lands, drives both him and the opponent straight into the air.

At the peak of the flight, Bison applies a Somersault Skull Diver that launches himself up while propelling the opponent downwards to the ground, then performs a very hard Head Press onto the fallen opponent's body.

Yet same game, alternate costume and stomping on Seth.

Final stomp of the attack in Ultra Street Fighter IV.
Add a photo to this gallery 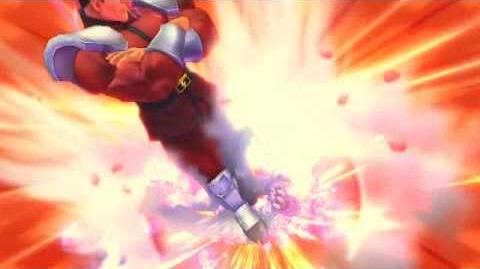