The Nitro Charge is one of Abigail's special attacks, introduced in Street Fighter V.

The EX version is performed by pressing all three kick buttons. This gives Abigail two-hits of armor. Also, he has an additional hitbox with each step he takes. This version can power through his opponent's attacks

If no follow-up direction or button(s) are pressed, Abigail runs for a total of 100 frames, before performing Dynamite Punch. However, depending on which attack button(s) or motion is used before or during the run, Abigail performs a different move.

Drop Back is executed by pressing back while Abigail is in his three-point stance. Abigail rolls backwards, away from his opponent. This move is used if Abigail anticipates that his opponent is expecting him to charge forward. Drop Back gives him a fall back option, rather than committing to the Nitro Charge. Additionally, using Drop Back can sometimes force his opponent to make a mistake.

Dynamite Punch is executed by pressing any punch button during Nitro Charge. Abigail performs a straight punch toward his opponent, similar to his Standing Heavy Punch. This attack can also be performed without pressing a button during the run. After 100 frames, Abigail automatically performs Dynamite Punch. On hit, it knocks down the opponent. It is mainly used to end juggle combos. It can also be cancelled into his Critical Art. It is -9 on block. Even if properly spaced, Abigail can still be punished.

The EX version of this move can be performed only during EX Nitro Charge. While the damage and stun remains the same as the normal version, EX Dynamite Punch puts his opponent in a crumple state on hit. This serves as a solid combo extender, allowing Abigail to follow-up with his command grab or another attack to inflict more damage. 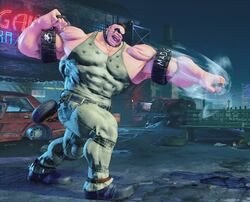 Avalanche Press is executed by pressing any kick button during Nitro Charge. Abigail somersaults toward his opponent and hits them with legs twice at the end of the rotation. This attack covers a lot of ground, almost a full length of the screen. In addition, this move is one of Abigail's overheads. Avalanche Press break through his opponent's defenses if they are crouch blocking. Compared to Abi Hammer, this overhead has a longer startup. However, it inflicts more damage and stun. It also results in a knockdown on hit.

This move is used to finish juggle combos. It inflicts more damage and stun than Dynamite Punch. While Abigail cannot cancel Avalanche Press into his Critical Art, he can use this move to leap over projectiles and attack his opponent while they're in their recovery frames. However, it is -11 on block, making this move less safer than Dynamite Punch.

The EX version of this move can be performed only during EX Nitro Charge. However, this has a faster startup than his normal version. It also inflicts more damage and stun. During EX Avalanche Press, Abigail has slightly more frames of projectile invincibility and armor at the beginning of the move.

Bay Area Sunrise is executed by pressing Light Punch and Light Kick, (the throw command) near his opponent during Nitro Charge. Abigail grabs his opponent by the sides and hoists them high in the air, off-camera. Abigail watches as his opponent plummets to the ground, crashing hard on their back and creating a large crater on impact. This attack is Abigail's only throw option during Nitro Charge. It is essentially a command grab, similar to Abigail Smash. This move cannot be blocked. It is great for keeping the opponent guessing and breaking through their defenses.

Compared to his other follow-ups, Bay Area Sunrise has the fastest startup and inflicts the most damage. Hitting his opponent with the command throw follow-up also prevents them from back rising, allowing Abigal to dash forward to continue pressure. However, whiffing he can use this move to break down their defenses and deal a large chunk of damage at the same time. However, his command throw has a lot of recovery frames, leaving him vulnerable if this move whiffs.

After using his Standing Light Punch to anti-air his opponent, Abigail can cancel into Nitro Charge and immediately perform his Bay Area Sunrise follow-up as they land in front of him. This can be difficult for his opponent to counter and escape. Even if they use their 3-frame move, Abigail can still grab his opponent to inflict a large amount of damage. In addition, Abigail is invincible to throw attacks during the startup of this move. 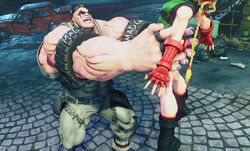 Nitro Hungabee is executed by pressing Medium Punch and Medium Kick during Nitro Charge if Abigail is equipped with his first V-Skill, Abigail will perform Hungabee as a cancel. Abigail flexes his muscles, anticipating a middle or high attack. If timed correctly, Abigail stick his chest out, using his body to deflect his opponent's attack and put them in a spinning state. By pressing down plus Medium Punch and Medium Kick, Abigail gets down on his knees as he flexes his muscles, anticipating a low attack.

Abigail can cancel into his V-Skill from Nitro Charge. This parry one of Abigail's defensive options, along with Drop Back. While Drop Back is a means to gain space between his opponent, Nitro Hungabee is used to counter their attack. If Abigail suspects his opponent is about to interrupt his follow-up attack with their own, then a properly timed V-Skill can turn the tables. By successfully parrying his opponent's attack, Abigail puts them in a spin state, giving him enough frames to perform a full combo to inflict optimal damage. Unfortunately, mistiming the counter leaves him vulnerable in a Counter Hit state.

The EX version can be performed only during EX Nitro Charge. It has a 2-frame startup and allows Abigail to parry all attacks.

Bay Area Surprise zoomed out sequence.
Add a photo to this gallery
Retrieved from "https://streetfighter.fandom.com/wiki/Nitro_Charge?oldid=213291"
Community content is available under CC-BY-SA unless otherwise noted.