Executed by tapping downward three times and pressing all three kick buttons, Hakan quickly oils up and lies down on his back. If an airborne opponent lands on him while in this position, they will slip and fall on their back, landing on Hakan's belly. He will then roll over on top of them and spin around so that their head is between his legs, then grab hold with his arms and legs and squeeze. As the pressure builds up to unbearable levels, he finally squeezes the opponent so hard that they fly out of his hold like a bar of soap, sliding on their belly and crashing face-first into the invisible "wall" of the stage.

This move is designed and best used as an anti-air, but it can also be comboed into with a few methods; Hakan can land this move after hitting a Focus Attack, and can also land it if he catches the opponent in the air with a jumping medium punch. 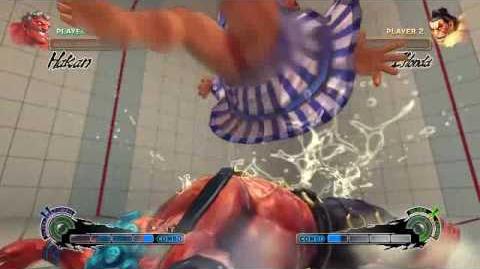