Start a Wiki
An overhead attack (or mid-level attack in Japanese terms) is a type of attack that appears in the Street Fighter games.

Overhead attacks bypass a low block by attacking downwards from a grounded position, while standing overhead (hence the name). Overhead attacks can be blocked high, however, and this necessity to block an attack at the correct height creates a "guessing game", where a defender must attempt to guess where the next attack is coming from, and an attacker must guess which way the opponent will block.

Characters in the Street Fighter III series also have a "universal" overhead, also known as a "leap attack". It is executed by pressing down twice and then pressing any punch or kick button simultaneously. In 3rd Strike, it is performed by pressing medium punch and medium kick simultaneously. These leap attacks can travel over many low-aiming moves, and are useful for poking an opponent out of "turtling", or defending constantly while ducking. Some characters use a preset normal attack for their animation (for example, Ryu uses his jumping medium punch).

This type of leaping overhead is also a staple for other characters in other fighting games; however, some usages of this type often vary in that they may possess more unique hitboxes and jump-arcs; some may not even be overheads at all. There are also very few other fighting games with a universal overhead for all characters in this scheme, only they may not involve a hop into an attack. Regardless, the most common theme of these kinds of hop attacks, overhead-or-not, is to crush/bypass low-hitting attacks of many kinds.

Universal overheads were removed in IV and by extension spin-off game Street Fighter X Tekken, (although Dudley still has his leap attack as a unique attack, executed by pressing down twice and then medium kick). Whether a character has an overhead is a character by character basis.

Overheads are overall slower in these games thanks to the removal of the Parry mechanic. Most overheads are not a part of combos with some exceptions, EG Hammer Kick. Overheads tend to make very little to no sound on startup to make them harder to react to.

Since the IV series, it takes the game some frames to officially transition a defending character's hurtbox between standing and crouching. For a few frames after a character crouches they still have their standing hurtbox, this allows some characters such as Ibuki with her Jumping Light Kick to perform a "Instant Air Overhead", taking advantage of these transitional frames to strike a crouching character. This tactic is usually refereed to as "fuzzy guard".

Instant Air overheads should only be used as finishers, as even on hit they are very negative afterwards in terms of Frame Data. If the opponent is within the KO range of their instant air overhead this tactic becomes very deadly, as instant air overheads usually have around 6-8 frames of startup. This is much faster than regular overheads and the startup can be masked with the approach and setup before the attack comes out. 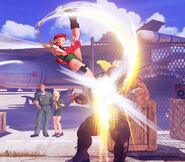 Ibuki doing a full combo off her own overhead.
Add a photo to this gallery
Retrieved from "https://streetfighter.fandom.com/wiki/Overhead?oldid=218937"
Community content is available under CC-BY-SA unless otherwise noted.