Street Fighter Wiki
Register
Don't have an account?
Sign In
in: Articles with insufficient citation, Attacks, Special Attacks,
and 8 more

Executed by charging backward then pressing forward and punch, Bison charges his right hand with Psycho Power, then surrounds himself with the energy while spiraling himself through the air towards his opponent, similar to a torpedo (in fact, early versions of strategy guides referred to this move as a "Flaming Torpedo") whilst holding out his palm to 'crush grind' into his target. Whether the attack knocks down or launches with a single or a few hits depends on the game.

The distance traveled, launch speed and damage dealt are all determined by the punch button pressed, with heavier punch versions meaning greater distance, speed and damage.

The EX Special version introduced in Street Fighter IV is faster, does the most damage and is immune to projectiles. Because of its aerial nature, it can go over low attacks. As a V-Trigger II-only move, it has projectile immunity and can lead to a cross-up.

When using M. Bison's Shadaloo-ISM variant in Street Fighter Alpha 3, he can use the Final Psycho Crusher, a much stronger version of the original Psycho Crusher. Here, he disappears and comes from off-screen and fills the whole screen with Psycho Energy as he does a Psycho Crusher that goes across the whole screen. It does a large amount of damage, up to more than half of the target's health, cannot be blocked in air and even does high chip damage.

A more powerful version known as the Psycho Break Smasher appears as Bison's Meteor Combo in the EX series.

In Street Fighter V, Bison lacks the standard Psycho Crusher (similar to the Alpha series), but his Critical Art is the Ultimate Psycho Crusher. Bison surrounds his body with a burst of Psycho Power; if the energy sphere connects with his opponent, it launches them into the air while Bison teleports backward and strikes with a powerful Psycho Crusher, pinning them to the far "wall". As of Arcade Edition, his second V-Trigger grants him access to the move again.

Generally, if the attack is performed at a close enough range to the opponent, Bison will pass by and come out of the move on the far side of the opponent, even if they block. However, if the opponent blocks, they will be able to attack a helpless Bison as the move ends and he recovers to standing position. Most of the time, this move is used as a gap-closer, but also as a way to cross-up the opponent should it hit and score a knockdown at the optimal range.

Although unconfirmed, the Psycho Crusher could have been inspired by an technique used by Bask from the manga and anime series Fist of the North Star. 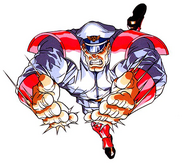 Psycho Crusher in The World Warrior

The Psycho Crusher featured in his Nightmare Booster Ultra Combo.

Another shot of Bison's Psycho Crusher from Street Fighter IV.