Executed by pressing Medium Punch and Medium Kick simultaneously, M. Bison creates a vortex by using his Psycho Power to absorb projectiles or other attacks. He stores the energy within him, which can be released. If M. Bison successfully absorbs an attack from close-range, he retaliates by delivering a back fist filled with negative energy to his opponent, knocking them backwards.

By pressing Medium Punch and Medium Kick simultaneously again after absorbing a projectile, M. Bison unleashes his Psycho Punishment, which is a fast-moving projectile filled with negative energy. If the buttons are held, M. Bison can absorb and reflect the attack back at the opponent at the same time.

The Psycho Reflect can be used to absorb any single attack, making it a form of parrying. However, it does not work against multi-hit attacks. Once Bison absorbs a projectile, he can hold on to his Psycho Punishment for as long as he likes. He can use this as a way to play mind games with his opponent, making them worry about the projectile as he suffocates them with heavy offensive pressure.

The reflected Psycho Power projectile hits twice, allowing it to pass through another projectile and giving M. Bison a greater advantage to win projectile battles. This move can be used to absorb and punish max range pokes. However, it requires Bison to effectively read his opponent, rather than reacting to their movements. 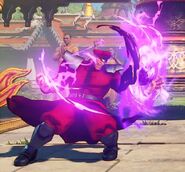