(Japanese version) She did not know him personally, but she has a relative working for Shadaloo who was nominated to be part of Shadaloo's executives. What will become of that division of Shadaloo when she learns this fact? She is a selfish princess after all. What are you going to do, Bison? Let someone else take care of that?

(Japanese version) "Do you even know who I am?" Thus echoes the shrilled voice of the pampered princess. All the other personcould do was be groggy. "This must be one of the fighting techniques used by Her Majesty." said the stewardess while starting to prepare her tea. "There is no one out there who can match this Princess."

In her EX3 ending, Pullum made it a point to practice dancing everyday after the tournament as she thinks to herself. "Is it better to wiggle my hips more or less? Is my expression is okay in this way?". Suddenly, the door opens unexpectedly and the man happens to be her bodyguard Darun who loudly calls her as "Master Pullum." He tries to inform her partner for that day's dance practice which Pullum replies "Oh! Mr. Darun... You are also..." this implies that she saw Darun's muscular appearance or she is commenting on Darun's interest in practice dancing.

Pullum is a wayward young lady who is brimming with curiosity and loves new things. She's searching for her Arab father, Barba Purna (バルバ・プルナ, Barba Purna?), who is working at Shadaloo's base, and travels the world to find him. She often causes trouble for her bodyguard Darun. She's also a member of the Worldwide Young Ladies Club.[1]

In Fighting EX Layer, she retains all of her moves from the Street Fighter EX series. Her tambourine now serves as her weapon to hit her opponents' head in a comical music backgrounds as her new grappling move. Both her Drill Purrus and her Purim Kick now have wind based properties in a similar style to that of Rashid's and her Præc Larum slightly resembles Rashid's Critical Art Altair. Her jumping ability now resembles Dhalsim's when she utilizes her Drill Purrus in a slower pace 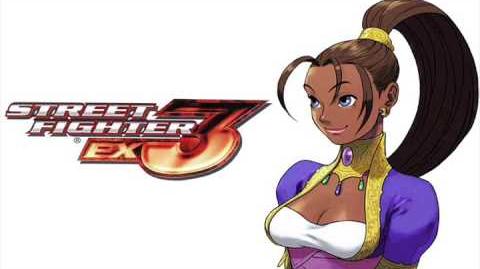 Retrieved from "https://streetfighter.fandom.com/wiki/Pullum_Purna?oldid=171872"
Community content is available under CC-BY-SA unless otherwise noted.