Puzzle Fighter was a crossover puzzle game developed by Capcom for iPhone, iPad and Android devices. The game is the sequel to Super Puzzle Fighter II Turbo and it was released in November 2017.[1] Puzzle Fighter was removed from application stores on June 2018, and its server was shut down on July 31, 2018.[2]

Based on Super Puzzle Fighter II Turbo, Puzzle Fighter is a competitive puzzle game in which players fight against each other using characters from Street Fighter and other Capcom franchises. Each player uses one main character and can also equip two backup characters who can perform support actions. During gameplay, colored gems drop down from the top of the grid and can be rotated and placed by the player. By connecting multiple gems of the same color together into square or rectangle formations, they can merge into larger gems. Players attack their opponent and clear their grid by using Crash Gems, which destroy all connected gems of the same color upon contact. Successful crashes deals damage to the opponent and sends them Counter Gems, which turn into regular Gems after the timer counts down unless a Crash is made next to them. More damage can be done by either crashing larger gems or performing chains of successive crashes. Additionally, there are diamonds that destroy all gems of the color it lands on.

Unique to this version is the Super Gauge, which can be built up with successful crashes or by placing the diamond on an empty space on the floor. When the gauge is full, players can perform a powerful Super Attack with their character. Extra damage is dealt to the player if they become overstacked and cannot place any more gems down, although this does not instantly defeat them like in the original game. Players win by reducing their opponent's health to zero.

The game is divided into two modes of play; Online Matches against human opponents through an internet connection, and Missions against computer opponents. By playing through each mode, players receive one of three main kinds of rewards; coins, gems, and skill cards, as well as additional characters and costumes. Coins and skill cards are used to increase each character's abilities, such as special moves that trigger when certain patterns are crashed. When players have enough skill cards and coins, they can upgrade these abilities, which also increases the character's experience and raises their level, making them more powerful. Gems serve as the main in-game currency, allowing players to purchase certain items or skip wait times, and additional gems can be purchased with real money. 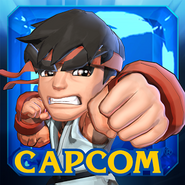