Quick Side-Kick is one of Lucia's unique attacks, introduced in Street Fighter V.

This is one of Lucia's target combos. It is a sequential combo with a chain of four different normals: Light Punch, Light Kick, Medium Kick, and Heavy Kick. There are four separate combos that derive from this target combo. With each normal used, Lucia performs a different attack; and thus a different combo. Depending on which combo is used, Lucia gains certain advantages.

Quick Side-Kick is executed by Light Punch and then Light Kick, Lucia delivers a fast punch to her opponent. When the attack connects, Lucia follows up with roundhouse kick to her opponent's upper body. She can confirm this target combo from Crouching Light Punch. This target combo has the lowest amount of hits, which also means it inflicts the least amount of damage and stun. While it is technically the safest on block, Lucia can still be punished.

Spin Drive is executed by pressing Medium Kick after Quick Side-Kick. Lucia, this time, follows up with a spinning heel kick. She the ends the combo with an additional roundhouse kick. This deals more damage than the aforementioned target combo. While it inflicts less damage than the ensuing combo, Lucia has a couple of follow-up options after hitting her opponent with Spin Drive. By pressing Heavy Kick afterwards, she performs the Street-Style Set for a knockdown and better okizeme. By pressing down and punch afterwards, she performs the Carry Bonus to switch sides with her opponent.

Street-Style Set is executed by pressing Heavy Kick after Spin Drive. Lucia ends the combo by delivering a jumping spin kick that knocks her opponent to the ground. Unlike the aforementioned target combos, this move results to a knockdown. It also inflicts more damage and has good corner carry. Lucia can use this target combo to put her opponent in the corner, thus allowing her to maintain offensive pressure. 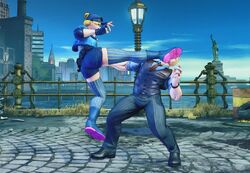 Carry Bonus is executed by pressing down and any punch after Spin Drive. Lucia grabs a hold of her opponent's collar, turns the other way, and uses her own leverage and torque to pull her opponent over her shoulder, launching them across the stage. The animation to this move is similar to her back throw. It is also has the highest damage output out of the prior target combos. This move is the only option that ends with a throw. It is effective for switching sides with her opponent or putting them back in the corner. However, the spacing after the throw makes it difficult for Lucia to maintain pressure.