In Capcom vs. SNK 2, Yun has a Super Combo where Yang assists him by performing the attack.

Executed by performing two quarter-circle forward motions and pressing punch (in the Street Fighter III series) or all 3 punch buttons (in the Street Fighter IV series), Yang adopts a snake-style kung fu stance then dashing forward with a hand thrust. If this connects, he will twist his hand and swipe it upwards, knocking the opponent up into the air slightly. What happens next depends on the version.

Yang will immediately finish the combo by dashing past the opponent with a forward leaning hand thrust, hitting multiple pressure points and inflicting sizable damage.

Yang follows the upward swipe with a smaller Tourou Zan that leaves him on the far side of the opponent, followed by a vertical Tourou Zan, a jumping, flipping hand slash which hits multiple times, then another Tourou Zan ("Raishin...") that leaves him on the side he started on ("...Mahhaken!"), and finally the dashing pressure point strike from the Super Art version which sends Yang straight through the opponent before they fly back a few moments later in a similar manner to Gen's Zan'ei ("Looks like you couldn't avoid that one!").

Compared to most other Super Arts in the Street Fighter III series, the move's setups are limited - only a juggling Byakko Soshoda or a Zenpou Tenshin can be used to combo into the move. Conversely, this Super Art is relatively safer on block. It can also be used as a comeback counterattack after guarding against an opponent's attack with long recovery time, or to foil certain Special or Super moves midway as it has higher priority and a certain degree of invincibility upon startup.

In 2nd Impact, the move has two stocks and inflicts sizeable damage, and is somewhat easier to setup via jump-in attacks. In 3rd Strike, however, the number of stocks was reduced to one, and comes out slower, requiring more precise timing to connect with combos; in exchange, the move inflicts more damage especially after a Personal Action, or as a counterattack. It also has slightly more reach and can pass through fireballs if timed right.

In Super Street Fighter IV: Arcade Edition, setup options include an EX Byakko Soshoda, Tourouzan, Zenpou Tenshin (with significant damage scaling), and the staple Focus Attack (which may require Dash Cancel or it may miss). It also breaks armor, and has some use as an anti-air, since only the first hit is needed to ensure the entire move hits. 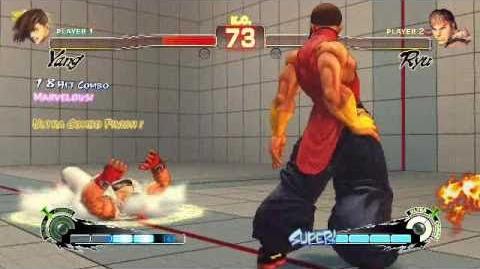