Street Fighter Wiki
Register
Don't have an account?
Sign In
Advertisement
in: Articles requiring cleanup, Articles in need of images, Characters,
and 9 more

Though still a freshman, Ran has already earned a reputation in Taiyo High as the resident "Scoop Girl", due to the fact that she is always on the hunt for the latest gossip, juicy story, or anything that sparks her interest. She is a spirited girl, almost as hot-blooded as upperclassman Batsu Ichimonji and her gym teacher Hayato Nekketsu. She has a strong desire to succeed, and always goes for the gold.

Ran has long dark purple hair which is tied in a high ponytail at the left side, black eyes and orange sunglasses on her head.

Like Chairperson, she wears a blue openly down vest under a long sleeve white buttoned shirt which is folded below the elbows. She has a pink ribbon on the collar, sky blue skirt, black fingerless gloves, black socks and red shoes. Unlike most of the other girls, she wears black cycling shorts underneath her skirt, and it has a red press logo at the left side of her shoulder.

In the School Life Mode of Nekketsu Seisyun Nikki 2, Ran is seen for the most part in her primary outfit. She is also seen letting her hair down in one formal occasion which is the Christmas event and wearing a corporate attire besides her primary outfit. Ran also wears two swimsuits between the Swimming Day and the Beach Overnight. Her first swimsuit is a sky blue two-piece bikini and the other being her salmon pink one-piece suit when she interviews Nagare.

Ran is a student at Taiyo High who is working toward a career in journalism. The editor in chief of the school's newspaper, she investigates the kidnappings and disappearances, seeking to scoop an exclusive news story. In truth, she decided to embark on this mission for a personal agenda: to win a very influential prize, Taiyo High's First Prize Scoop.

Ran works alongside with both her fellow Taiyo High classmate, Chairperson and the reunited Pacific High trio (Boman, Roy, and Tiffany) from within a joint investigation in order to find the ones responsible for creating havoc and distrust between the schools via a new threat to them. In the Pacific High ending, Ran decides to make a journal about Roy's future while waving goodbye along with Boman and Chairperson outside the airport where the plane that Roy and Tiffany rides had passed through.

In the Taiyo High ending, Ran is responsible for taking a photo of fellow classmate Kyosuke who was emotionally devastated after the tragic death of his twin brother Hyo, which is the main reason of why Kyosuke did not come back to school afterwards and it was said that Ran herself had felt personally guilty for taking the photo of an unfortunate family tragedy and in due time, Ran, Batsu, Hinata, Chairperson, and the rest of their classmates personally and emotionally await the return of Kyosuke.

Ran fights by using two different weapons: her personal camera and a harisen (ハリセン huge paper fan) which can deflect projectile attacks back to her opponents. In Project Justice, she has the most powerful Burning Vigor Attack, which is also among the most difficult to successfully connect. 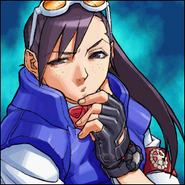