Retsu (烈, lit. "Furious") is a non-playable character from the Street Fighter series who first appeared in the original Street Fighter game as one of the ten computer-controlled opponents.

Just before the first game, Retsu was indefinitely excommunicated from his temple for using forbidden techniques. His encounter with a young Ryu made him change his ways however, and he now lives as an ascetic martial artist.[1]

While Retsu has so far not appeared in another Street Fighter game since the original, he still forms part of the later games' backstories, being established as a friend of Ryu and Ken's teacher, Gouken. He is also a friend of Dhalsim and had met Oro in the past.[1][3]

Retsu appears in the UDON comic series of Street Fighter, where he is an assistant of Goutetsu at his dojo; he is first seen making food for an injured Akuma.

Retsu paid a visit to Gouken in the mountains, informing him that Goutetsu was the only other student who was able to stay in the mountains for fourteen days without food and water, informing him that he has reached enlightenment; he mentions that Akuma has come to an awakening of his own. Retsu then showed Gouken the village where the people who killed his father lived; after Gouken told him that he had no intention of fighting them, Retsu told him that his training was complete.

Retsu went out to look for Akuma after promising to find him for Gouken; he first went to Tokyo, only to find that he has no mailing address. He then goes to a village to ask other fighters about him, but was met with stories of how Akuma was the devil incarnate and an evil demon cast from the heavens to bring suffering to humanity; they described him as an inhuman killer of the highest order who revels in sending souls to hell, and a master of pain and death who has killed men, women, and even children. Retsu reports all of this back to Gouken, and suggests that he should forget about him.

At a later point in time, Retsu spars with Ryu to test the boy's skills, and is brutally beaten by Ryu under the influence of the Satsui no Hado, but is stopped by Gouken before Ryu could go too far. As Gouken supervises Retsu's recovery, he tells him that he is fine, and tells Gouken that his student is much stronger then he appears.

He plays a role in a pair of Street Fighter II Drama CDs released only in Japan, "Mad Revenger" and "Portrait of the Magician", where he is voiced by Takeshi Aono.

Retsu was supposed to make his playable debut in Capcom Fighting Evolution, representing the first Street Fighter game alongside Eagle (using his Capcom vs SNK 2 sprite) and a redesigned young version of Sagat without his chest scar. Due to time constraints, all three were cut from the game.[4]

Retsu in the original Street Fighter. 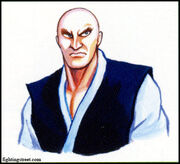 Retsu's versus screen icon from the original Street Fighter. 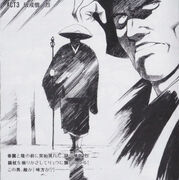 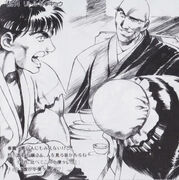 Retsu next to a defeated Dan in concept art for Street Fighter Alpha.

Retsu (bottom right) featured in a variant cover for issue #3 of Street Fighter Unlimited by UDON.