Original style based on Soccer

Guns, soccer, and anything else related to the sport[1]

Roberto possesses a cool and shy side. Most of the time, he's a quiet loner. Nonetheless, he will not abandon anyone who is in need of help. Outside the soccer field, he's a cool guy, but becomes hot-blooded when inside it. He gives it his all whenever he makes the team's make-or-break shot. In the School Life Mode of Nekketsu Seisyun Nikki 2, Roberto often helps the player to get things at the sport shop and assisting both the instructor Mari Nanase and his close friends Natsu and Nagare during the School Fair Day.

Roberto has medium-length fluffy neck brown hair and wears a blue opened cap to conceal his eyes. One of his default win animations has him shown half of his eyes beneath his opened cap and his eyes are shown to be brown. This was changed in Project Justice where his eyes are covered with full fringes beneath the cap.

His primary outfit is a long sleeve yellow and blue stripe collared jersey with a Gorin emblem on his right chest, blue shorts with white folded sleeves, yellow socks and navy blue and red sneakers. It has extra blue lines on both sleeves of his shirt. He wears red and black gloves.

In his, Shoma's, and Natsu's endings from Rival Schools: United by Fate, his Gorin summer uniform consists of a white short sleeved loose collared shirt with a Gorin emblem at the left side and an extended collar, blue jeans and his navy blue and red sneakers. In the School Life Mode of Nekketsu Seisyun Nikki 2, Roberto often wears his primary outfit, his school uniform and his casual outfit. During the School Fair Day, Roberto wears his winter school uniform but without the jacket and sweater vest and the sleeves from his white long sleeve button shirt was folded into cuffs. He also wears a semi-formal attire during Christmas Day. On New Years Day, Roberto's blue opened cap is replaced with a blue and white winter bonnet while wearing his winter casual outfit.

Roberto is a member of Gorin High's soccer team. Though he is quarter-Brazilian, his nationality is Japanese. Upon learning that the highest-ranking member of every sports team in Gorin High was attacked and that two students from different teams, Shoma and Natsu, started conducting an investigation, he joined the two in the quest. Throughout the story, he serves as a moderator between Natsu and Shoma whenever the two argue. He accidentally breaks his left arm towards the end of the mission, worrying him because he will not be able to play his preferred position in the soccer team, as goalkeeper. A scout, however, offered him a chance to play as a forward. Roberto is excitedly thankful to the scout and proceeds into using both of his hands to grab and shake the scout's own right hand, which causes Roberto to comically and inadvertently hurt his injured left arm from within the process of his current action and that both the scout and his mother soon laugh at him from within a playful and amusing manner.

Roberto is once again caught in the middle of Natsu and Shoma's argument. This time, it was whether or not they should investigate on who had attacked Momo from earlier on. Shoma eventually splits from the team and decides to go with Momo, unaware that he was being used as an unwitting and unsuspecting pawn to create further chaos and distrust that Kurow had started. Roberto, along with Natsu, eventually meet up with Nagare and continue on with the investigation, unaware that Momo had ordered the brainwashed Daigo to deal with them upon sight. Later on, Shoma returns to the team after being unexpectedly betrayed by Momo, with the latter soon becoming a part of the group herself in due time after being shockingly betrayed by Kurow and that Shoma had surprisingly came to her defense (along with saving her from getting her head chopped off by Demon Hyo).

After the incident, Roberto and Nagare comment to each other about the newly-formed love triangle between Shoma, Natsu, and Momo as Shoma himself was comically chased by both Natsu and Momo.

Roberto utilizes his Soccer skills and techniques as part of his fighting style. He can also utilizes a somersault kick to launch the opponent in mid-air and taking them down into the ground with an aerial version of the same move during an air combo. One of his moves can confuse the opponent as well as grabbing the opponent down and heavily kicks them into the ground. Like Shoma, Natsu and Momo, Roberto's projectile involves the use of soccer balls. His Burning Vigor can be very damaging which is to set his opponent a blaze in a massive damage.

The ball follows a mid-ranged trajectory, landing halfway across the field.

The ball goes at an upward angle of approximately 20 to 30 degrees, giving it infinite range. Done from afar, this makes a good anti-air attack.

As with the Pacific High characters, his name is written in the Western format--first name, followed by the last name (Roberto Miura instead of the Oriental format Miura Roberto). 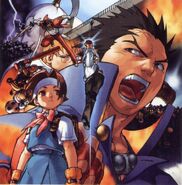 His ending in School Life Mode.
Add a photo to this gallery

Retrieved from "https://streetfighter.fandom.com/wiki/Roberto_Miura?oldid=235150"
Community content is available under CC-BY-SA unless otherwise noted.