Laura Post (Street Fighter V)
Roxy (ロキシー, Rokishī?) is a character from the Final Fight series, appearing as a member of the Mad Gear Gang. She appears as a palette swap of Poison, having orange hair instead of Poison's trademark pink.

Roxy appears very similar to Poison in design, except her hair color is orange. She wears a black peak cap, a midriff-revealing tanktop, black high-heeled shoes (though they were red in Abigail's character story), cutoff red jean shorts and, like Poison, carries around a pair of handcuffs.

In her Street Fighter V profile artwork, Roxy now has a red vest and a lacy white band around her left leg. She is shown carrying a metal baseball bat.

Not much is known about Roxy's personality, but she said to have a characteristically husky voice, possibly implying she has a seductive or bewitching demeanor most of the time. Referred to as "the flower of the Mad Gear Gang", Roxy enjoys wasting money[1] and wasting time on trivial pursuits.[2] She looks up to Poison, who was raised in the same orphanage as her.

Like Poison, not much is known about Roxy's background, as she prefers not to speak about it. She was raised in the same Los Angeles orphanage as Poison was, and the two eventually made her way to Metro City, joining up with the Mad Gear Gang.

Roxy appears as a common enemy in Final Fight, working as a member of the Mad Gear Gang during Belger's attempt to retain his control over Metro City from newly elected Mayor Mike Haggar. She often appears alongside Poison, confronting Haggar, Cody, and Guy as they attempt to rescue Haggar's daughter, Jessica.

After the fall of the Mad Gear Gang, Roxy is active in the Metro City Bay Area alongside fellow ex-Mad Gear members Abigail, Axl, and J.[1]

Roxy appears in Abigail's character story, where she, Axl and J have become employees at his auto shop after the fall of Mad Gear. They remind him that he let the trio borrow his car (which Abigail thought was missing) and mocks him for forgetting his promise. Furious, Abigail throws them all into the car and walks away.

Roxy also shows up in Poison's character story, where she greets her former comrade after Poison returns to Metro City in search of new wrestling talent.

Roxy missing her kick in the original arcade version of Final Fight.

Roxy and Poison fighting together against against Haggar.

Poison's default alternate color is based off Roxy in Street Fighter X Tekken. 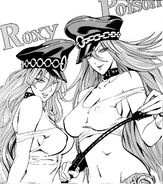 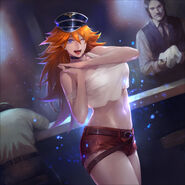 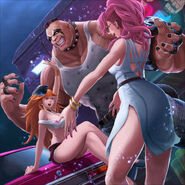 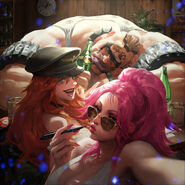